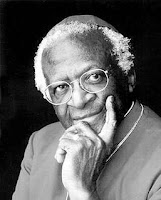 This racist anti-Jew windbag is really getting annoying.
The BBC reported:

Archbishop Desmond Tutu has warned Barack Obama of the risk of squandering the goodwill he says the US president’s election has generated.

In an article for BBC News, he says it would be “wonderful” if Mr Obama apologised for the invasion of Iraq.

He also says he prays that Mr Obama will be tough on African dictators.

He reminds his readers of the outpouring of sympathy that followed 9/11 and how quickly it vanished in the light of the allegations of prisoner abuse at Abu Ghraib and Guantanamo Bay.

“Obama, too, could easily squander the goodwill that his election generated if he disappoints,” he says.

He adds: “It would be wonderful if the US president could apologise for the US-led invasion of Iraq on behalf of the American people.”

The archbishop says November’s election has turned America’s image on its head after what he says were seven lean years for those who looked to America for inspiration.

But Desmond Tutu is also critical of the role of the British government in the so-called war on terror.

He says the country’s standing has been damaged as a result of its close co-operation with the US and that it lacks what he calls the “redeeming Obama factor” to restore the UK’s perception abroad.

Put a sock in it, Tutu.
If we’re lucky, someone will chuck a shoe at this louse during his talk.