After the CIA frogmarched (I like definition #2) the $9,500 Democratic donor from the General’s Office on Thursday, the Associated Press felt it appropriate to publish… 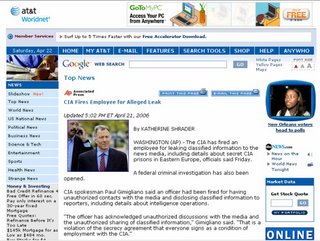 …a picture of Cheney aide Scooter Libby in its coverage of the Democratic CIA leaker.

Obviously, the Culture of Treason Party is not going down easy like a $5,000 cash donation to the Ohio Democratic Party in the ’04 elections.

Mark Levin is monitoring the spin at National Review Online:

They’re fixated with the weather and gas prices — and anything else that will divert the public’s attention from the stunning revelation that a Sandy Berger crony has apparently been leaking top-secret information from her high post at the CIA. The media will continue to downplay this story as they cover-up their own role in exposing our nation’s secrets, including the supposed existence of CIA prisons in Europe.

She’ll be called a “whistleblower” and praised as some kind of patriot (a patriot, in the eyes of the media, is anybody who undermines this administration and the war effort by leaking national security secrets to them). They will downplay that McCarthy was a Clintonoid who somehow managed to land a top post at the CIA, ultimately winding up in the CIA’s Inspector General’s Office, from where she could monitor CIA internal investigations of, well, leaks, among other things.

The news spin, to the extent attention is being paid to this by the big media outlets, is that McCarthy’s firing is unprecedented! Or it’s Bush’s fault! In one of the most absurd comments by any newsman anywhere, Newsbusters.org notes that Bob Schieffer of CBS Evening News asserted that “it is no secret that the current administration does not like its people hanging out with news reporters without permission” and he described the firing as “a first — a dubious first, to be sure.” Here. Is this guy for real?

Now, reports come out that not only was the Pulitzer Prize winner a huge Democratic supporter, but her husband, William Goodfellow, is executive director of the Center for International Policy who’s mission includes reform of the nation’s intelligence agencies!

So Dana Priest reports on the CIA through leaks by the Democratic donor Mary O. McCarthy, while her husband heads a left-wing organization that wants to “reform the CIA”… Sweet! 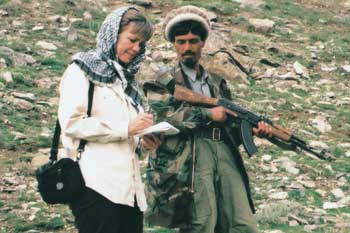 Dana Priest interviewing a farmer(?) in Afghanistan.
(To the Leftists, they’re all farmers!)

What else does the Center do? Well it complains bitterly that we did not accept the doctors that Castro offered in the wake of Katrina. Referring to him as “President Castro” (a formulation that appears to give far too much respect to a brutal dictator) the Center issued this statement.

They call Bush “delusional” since he seems to believe that Castro’s government will fall relatively soon, and he has taken the prudent step of appointing a “transition coordinator”. This seems to have inordinately outraged them.

Now, it is not certain that Dana Priest shares any of her husband’s views. She may be a hard-bitten conservative, and her marriage may be of the Carville-Matalin variety.

While Dana was publishing leaks from a high level CIA operative, her husband’s organization, CIP, was releasing articles, quotes and interviews like this one in the Baltimore Sun:

Over the years, there have been many attempts to politicize intelligence. But no government has been so blatant as the Bush administration, which used phony intelligence to justify the war against Iraq and has introduced a new director of central intelligence, Porter J. Goss, to conduct a political housecleaning at the highest levels of the agency.

The CIA director, Mr. Goss, has warned all hands that they must “support the administration and its policies,” and appears to have begun a bureaucratic housecleaning to ensure such support…

…Instead of negotiating the intelligence reform proposals of the Senate and House, it is time for the intelligence committees of the legislature to monitor the political behavior of the CIA director and to ensure that the agency provides objective and balanced intelligence assessments to policy-makers.

While Dana Priest was doing interviews about Gitmo torture practices, her husband’s organization releases this piece on Gitmo abuse:

Their argument is that given the many reports of detainees being abused there, Guantanamo has come to be seen internationally as a symbol of U.S. disregard for human rights and for the Geneva Conventions. And so, to get rid of the harmful symbol, we should close it.

They are right. The administration’s denials that any abuses have occurred have lost all credibility.

Before 9/11, The Center for International Policy, CIP, a Fenton Communications client, mainly acted as Fidel Castro’s greatest “think tank” ally. Much of its million-dollar budget was spent lobbying to end economic sanctions and travel restrictions against Cuba.

Now, it has another mission. Fenton has established a “war room” with CIP called The Iraq Policy Information Program (IPIP). Its main job is getting the anti-Bush foreign policy message out to the media and providing guests for talk shows. A featured speaker of the IPIP is former ambassador Joe Wilson, one of the Bush administration’s most vocal enemies.
Like Moveon.org and Win Without War, the contact for the Iraq Policy Information Program is Fenton Communications. Win Without War also collects tax-deductible donations through CIP.

Can we now call this a Culture of Treason? …Or must there be more proof?

Funny, Ace and Wizbang were right. The mainstream news is circling their wounded like a herd of musk ox. Here is the latest from the New York Times:

Goodness!… Does that mean they’re all playing by these rules?

Sweetness and Light has a great scoop on Dana Priest and Joe Wilson.
AJ Strata has much more on the circling musk oxen.
Woah! Babalu is not pleased to hear about the Castro apologists…

From sticking up for Castro, to HELPING Castro by penetrating and discrediting the CIA, this really sounds like a lovely crowd over at the Washington Post.