The White House put out the following statement today addressing the House vote from last night:

Victory in Iraq is key to prevailing in the war on terrorism and laying the foundation of peace for our children and grandchildren. Our commanders and troops know how high the stakes are, and they understand the importance of completing the mission.

For the second time this week, Congress in strong, bipartisan fashion rejected the call to cut and run. The best strategy to keep America safe is to continue taking the fight to the terrorists, not to retreat in the face of the despicable attacks of a determined enemy.

We will succeed in Iraq by hunting down the terrorists, training Iraqi forces and supporting the Iraqi people as they build the foundations for a lasting democracy in the heart of a dangerous region of the world. When victory is achieved our troops will return home with the honor they deserve.

Open Fire sums it all up.

Joshua has more on the President’s stop in Korea including the the strange timing of the Roh Government’s announcement on Iraq.

The president spoke to troops on Saturday in South Korea. 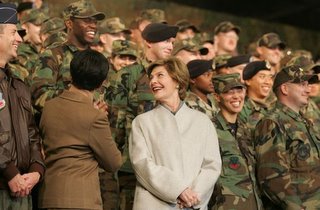 Laura Bush smiles back at the troops Saturday after she and the President stopped en route to China at Osan Air Base in Osan, Korea. (White House photo by Shealah Craighead)