As China plays host to Karimov, the Anti-Americans start their attack on the US. 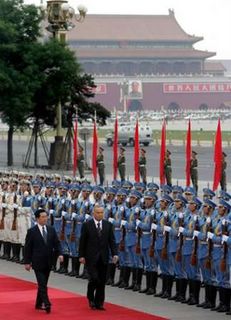 President Karimov visited China today in his first foreign trip since the Massacre in Andijan.

Chinese President Hu Jintao is expected to hold talks with Karimov. Karimov will also meet with Chinese Premier Wen Jiabao, sources with Chinese Foreign Ministry said. Nosirdjon Yusupov, Uzbekistan’s ambassador to China, told
Xinhua that the two heads of state will exchange views on regional and international issues of mutual interests.China and Uzbekistan are both members of the Shanghai

The day before Karimov’s arrival China expressed support for the government “crackdown” in Uzbekistan, saying…

“We firmly support the efforts by the authorities of Uzbekistan to strike down the three forces of terrorism, separatism and extremism.” 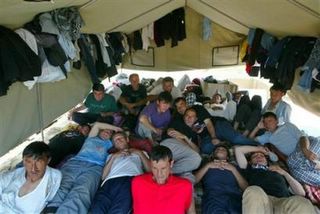 “Resting” at a refugee camp in Kyrgyzstan.

Meanwhile, back on the homefront, the government confirmed the arrest of a human’s rights activist after the massacre in Andijan:

The New York-based Human Rights Watch on Tuesday urged Uzbekistan to release a prominent human rights defender detained following this month’s military crackdown. The head of the Apelatsia rights group, Saidjahon Zainabiddinov, was arrested on May 21 in Andijan, the city at the centre of clashes feared to have left hundreds dead, Human Rights Watch said. The arrest, which had been rumoured here for some time, was confirmed by a government-appointed lawyer on Monday. 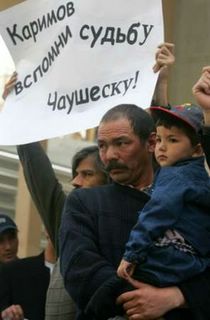 The US is also pushing Uzbekistan to open Andijan to international investigators.

Russia, however, says today that the demands on Uzbekistan are unfair!

Questions still remain about how many were killed in Andijan in the protests. Local activists are saying that over 3,000 people are still unaccounted for.

Anti-American voices are taking aim at the Bush Administration for the Andijan Massacre. One of the Left’s leading voices, Ted Rall, had this to say yesterday:

The Bushies were aware of Karimov’s horrific record back in 2001. That year’s Human Rights Watch report on Uzbekistan put its “conservative estimate” of Uzbek political prisoners at 7,000. According to HRW: “Prison guards systematically beat prisoners with wooden and rubber truncheons and exacted particularly harsh punishment on those convicted on religious charges, subjecting them to additional beatings…Torture remained endemic in pretrial custody as well.” George W. Bush didn’t mind. He accorded Karimov all the honors of a full state visit to the White House shortly thereafter.

How can the United States claim to be fighting a war on terrorism when its biggest allies are terrorists themselves?

Nathan at the Registan gives an in depth look at the situation.

Update: Instapundit explains that “Karimov is cozying up to China, whose leaders are understandably disturbed by the spread of democracy in the region, and untroubled by Karimov’s Tiananmen-like massacre.”