Islamist militants dressed as policemen attacked a political rally in Kashmir throwing grenades and firing on the crowd,
VIDEO HERE 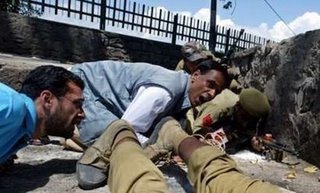 Indian police and journalists take cover behind a wall during an attack on a political rally in Srinagar May 21, 2006. A gunfight broke out in the heart of Kashmir’s main city on Sunday near a public rally, witnesses said. Hundreds of people had gathered to attend a rally organised by the ruling Congress party. (REUTERS/Fayaz Kabli)

Eight people died in the ambush including two of the militants. Authorities suspect that there are other militants hiding out in the area:

Police said militants, one of them in police uniform, sneaked into a gathering of hundreds of Congress Party supporters in Srinagar and opened fire.

“We eliminated two militants,” A.P. Maheshwari, Inspector General of the federal police force who led the operation against the militants, told Reuters.

“We suspect some others are hiding around,” he said. “Though the firing has stopped, we are searching the area.”

This rally is over. 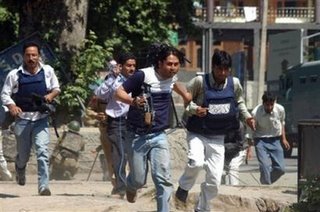 Media persons run for cover during an attack by suspected militants at a political rally in Srinagar, India, Sunday, May 21, 2006. (AP Photo)

This is the second major attack by radical Islamists this month:

Islamist militant groups Al-Mansoorian and Lashkar-e-Taiba (Army of the Pure) claimed responsibility for Sunday’s attack in a call to a local news agency.

It was the second major incident in Kashmir in May, after suspected Islamic militants shot dead 35 Hindus in the remote Doda region on May 1. 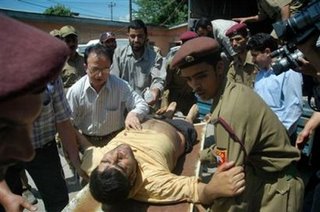 Paramedics carry a civilian wounded in a suspected militant attack during a political rally in Srinagar, India, Sunday, May 21, 2006. Suspected Islamic militants hurled grenades and fired bullets into the crowd at a ruling Congress Party rally in India’s portion of Kashmir on Sunday, killing one policeman and wounding at least 13 people before one of the attackers was killed. (AP Photo/Dar Yasin)

More than a dozen Islamic militant groups have been fighting in India’s portion of Kashmir for the region’s independence or its merger with mostly Muslim Pakistan. The insurgency has claimed more than 66,000 lives, mostly civilians, since 1989.