The killer Iranian regime will celebrate Yom Kippur with fireworks.
The Iranians announced that they will conduct war games and shoot off missiles that can hit Israel during the Jewish holy day. 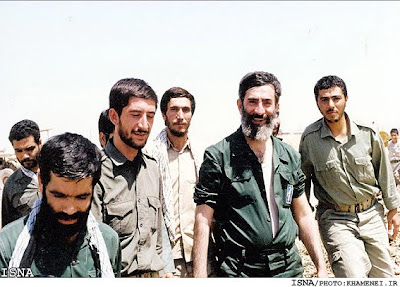 The illegitimate Iranian regime is led by Ayatollah Khamenei shown here in his early years in the military. (ISNA)

Iran will conduct war games and fire missiles that can hit Israel while Jews around the world are praying on Yom Kippur, the Day of Atonement. The Revolutionary Guards website said that military exercises, including the simultaneous firing of missiles at targets, will begin Sunday and last for several days “to raise the deterrence capability of the Iranian armed forces.” Yom Kippur begns Sunday night.

Several months ago, Iran said it had tested a missile that could reach Israel as well as American bases in the Middle East.

The announcement regarding the planned military exercises came at the same time that the Islamic Republic revealed it is building a second uranium enrichment facility. Iranian officials added that the new site is open for inspection by the United Nations’ International Atomic Energy Agency (IAEA).

“Allah willing, this plant will be put into operation soon, and will blind the eyes of the enemies,” Head of Supreme Leader’s Office Hojjatoleslam Mohammad Mohammadi Golpayegani said in Tehran Saturday.

Iran said it successfully test-fired short-range missiles during military drills Sunday by the elite Revolutionary Guard, a show of force days after the U.S. warned Tehran over a newly revealed underground nuclear facility it was secretly constructing.