Ahmadinejad’s spiritual advisor told followers this week that raping prisoners is okay but wash your hands first…
But, if the prisoner enjoys it then please don’t repeat the rape. 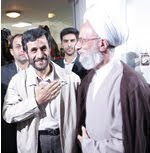 According to the Intelligence and Terrorism Information Center (ITIC), an independent Israeli intelligence analysis organization, Mesbah-Yazdi is considered Ahmadinejad’s personal spiritual guide. A radical totalitarian even in Iranian terms, he holds messianic views, supports increasing Islamization, calls for violent suppression of domestic political opponents, and, according to the ITIC, “declared that obeying a president supported by the Supreme Leader was tantamount to obeying God.”

At the Jamkaran gathering, Mesbah-Yazdi and Ahmadinejad answered questions about the rape and torture charges. The following text is from a transcript alleged by Iranian dissidents to be a series of questions and answers exchanged between the ayatollah and some of his supporters.

Asked if a confession obtained “by applying psychological, emotional and physical pressure” was “valid and considered credible according to Islam,” Mesbah-Yazdi replied: “Getting a confession from any person who is against the Velayat-e Faqih (“Guardianship of the Islamic Jurists”, or the regime of Iran’s mullahs) is permissible under any condition.” The ayatollah gave the identical answer when asked about confessions obtained through drugging the prisoner with opiates or addictive substances.

“Can an interrogator rape the prisoner in order to obtain a confession?” was the follow-up question posed to the Islamic cleric.

Mesbah-Yazdi answered: “The necessary precaution is for the interrogator to perform a ritual washing first and say prayers while raping the prisoner. If the prisoner is female, it is permissible to rape through the vagina or anus. It is better not to have a witness present. If it is a male prisoner, then it’s acceptable for someone else to watch while the rape is committed.”

This reply, and reports of the rape of teen male prisoners in Iranian jails, may have prompted the following question: “Is the rape of men and young boys considered sodomy?”

Ayatollah Mesbah-Yazdi: “No, because it is not consensual. Of course, if the prisoner is aroused and enjoys the rape, then caution must be taken not to repeat the rape.”