Another Republican speaks out for the people of Iran…
Rep. Mike Pence sends a message to America’s weak and absent leader.
GOP.gov reported:

This morning during an appearance on FOXNEWS, Congressman Mike Pence, Chairman of the House Republican Conference, made the following statement regarding the administration’s involvement regarding demonstrations by Iranian dissidents:

“The President has the right to draw the line where he chooses to draw it but I am someone who believes that when Ronald Reagan went to the Brandenburg Gate, he did not say ‘Mr. Gorbachev, that wall is none of our business.’ He went to the Brandenburg Gate and he said, “Mr. Gorbachev, tear down this wall.” We know from people like Natan Sharansky and Alexander Solzhenitsyn that deep in the gulags of the Soviet Union, when Ronald Reagan was willing to call the Soviet Empire ‘the evil empire’, it gave encouragement to the people who were fighting tyranny within the Soviet Union.” 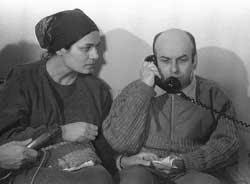 Natan Sharansky is a former political prisoner from Russia and as a young man was sentenced to thirteen years imprisonment in the Siberian gulag. During the years of his imprisonment, Sharansky became a symbol for human rights in general and Soviet Jewry in particular. A campaign for his release was waged tirelessly by his wife, Avital, who emigrated to Israel immediately following their wedding with the hope that her husband would follow shortly. Natan speaks often of his admiration of Ronald Reagan:

When Ronald Reagan called the USSR an evil empire he was fiercely criticized by many in the West who saw him as a dangerous warmonger. But when we in the Gulag heard of Reagan’s statement, we were ecstatic. We knew that once there was no moral confusion between the two types of societies, once good and evil were kept separate, the Soviet Union’s days were numbered. Soon, the most fearsome totalitarian empire in human history collapsed without a shot being fired and the cause of peace and security was advanced. I have no doubt that moral clarity will have the same effect today and equally serve the cause of peace, stability and security around the world. 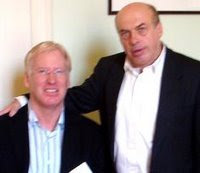 I met Natan Sharansky in 2007 at the Democracy and Security Summit in Prague, Czech Republic and later in the year in Israel. He still works to promote democracy and freedom.