Regime thugs are beating protesters bloody.
A hospitalized Iranian protester is cared for at a hospital in Iran:
(Warning: Very Graphic)

Translation of the dialogue in the clip:

– 50 people jumped on him
– bastards
– how long are they going to keep up this massacre?
– For as long as Khamenei is alive
– diabolical mother…
– why doesn’t he resign like a normal human being?
– (whispering) that’s the way it is
– Mother…
(sound of crashing)
– Watch it sir…when I tell you to stay out (while I’m trying to treat him) this is the reason. Step out, please step out and allow me to do my job…
– Has he prescribed any medication for you?
– No he didn’t.
– My fee is 5000 Tomans (approximately $5)

Doctors and nurses from Rasoul Akram, one of Tehran’s major hospitals, protested against the violence and killing on Tuesday.

James Taranto added this on Obama’s weak response to the Iranian democracy protests, via Instapundit:

We’re All Neocons Now: Obama’s timidity on Iran leaves him increasingly isolated. “It is extraordinary that the two most senior administration officials apart from the president himself are airing their objection to his policies in this way. . . . Meanwhile, Obama has some of his liberal-left supporters sounding like frustrated neoconservatives.” 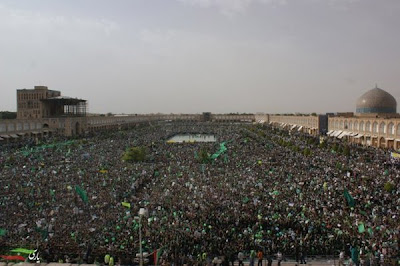