THE US RENEWED ITS COMMITMENT TO THIS HEALTH CRISIS ON WORLD AIDS DAY,
VIDEO HERE

HIV/AIDS Is a global health crisis which has killed at least 20 million men, women, and children worldwide. More than 40 million people are living with this disease, including more than one million Americans. 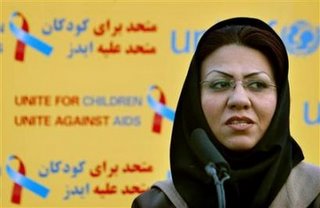 Iranian Mohammadi, who is HIV positive, speaks during a ceremony to mark World HIV/AIDS Day at the Ararat sport complex in Tehran December 1, 2005. (Morteza Nikoubazl/Reuters)

After Two Years, The President’s Emergency Plan For AIDS Relief (PEPFAR) Has Supported Life-Saving Treatments For Approximately 400,000 Sub-Saharan Africans Living With HIV/AIDS. Before the President announced PEPFAR in 2003, only 50,000 of the more than four million people in sub-Saharan Africa needing immediate AIDS treatment were getting medicine.

The President Today Announced The New Partners Initiative As Part Of PEPFAR. By identifying and supporting the organizations that provide much of the health care in the developing world, including faith-based and community organizations, PEPFAR resources will reach more people, more effectively. 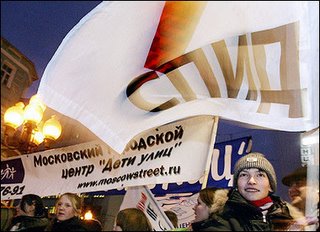 America sees an estimated 40,000 new infections each year, and the demographics of the disease are changing. HIV/AIDS is increasingly found among women and minorities, with nearly half of new infections occurring in the African-American community. HIV/AIDS remains a particular concern in the gay community, which has effectively fought this disease for decades through education and prevention. 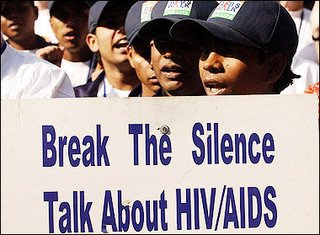 Indian volunteers march through the country to raise awareness of HIV/AIDS, in New Delhi. The UN marked World AIDS Day with a call for an ‘exceptional’ response to the pandemic now affecting a record 40.3 million people.(AFP/Manpreet Romana)

The Federal Government provides more than $17 billion each year to help people in America living with HIV/AIDS. In the United States, some have now lived 15 years or more with HIV/AIDS. Due to domestic treatment and prevention efforts, HIV/AIDS is becoming more of a long-term illness like diabetes or heart disease.

The United States Is Supporting Our Partners Through The President’s Emergency Plan For AIDS Relief. PEPFAR, the largest international health initiative dedicated to a single disease in history, is providing historic levels of support to the fight against the AIDS pandemic. This effort is designed to support and strengthen the AIDS-fighting strategies of many nations, including 15 heavily afflicted countries in Africa, Asia, and the Caribbean. The President has committed $15 billion over five years to support treatment for 2 million people, support prevention for 7 million, and support care for 10 million. After two years, approximately 400,000 sub-Saharan Africans are receiving the treatment they need. 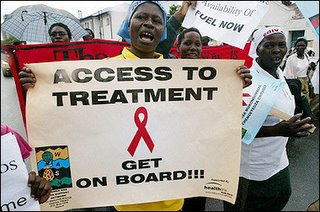 Zimbabwean women’s pressure groups march in Harare to mark World AIDS Day. While other protesters just want fuel which is one thing in short supply in Zimbabwe. The UN marked World AIDS Day with a call for an ‘exceptional’ response to the pandemic now affecting a record 40.3 million people.(AFP)

The United States Is Working With Our Partners To Provide Treatment And Expand Prevention Efforts That Emphasize Abstinence, Faithfulness In Marriage, And The Correct Use Of Condoms. This strategy – pioneered by Africans – has proven its effectiveness, and America stands behind the ABC approach to prevention.

The New Partners Initiative Will Expand Partnerships, Including Faith-Based And Community Organizations. This new initiative will establish a competitive grants process for new partners, including faith- and community-based organizations, with the desire and ability to help implement PEPFAR, but who have little or no experience in working with the United States government. By identifying and supporting the organizations that provide much of the health care in the developing world, PEPFAR resources will reach more people, more effectively. 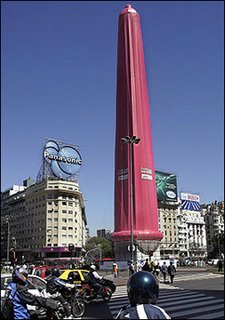 The obelisk in Buenos Aires was covered with a giant pink condom today for World AIDS Day. (AFP)

Swaziland, which has the world’s highest rate of HIV, cut their AIDS day activities this year.