Iran Focus is reporting that a May Day Rally held today in Azadi Stadium, the scene of last month’s riot, grew into an angry anti-government protest:

A packed Azadi Stadium in Tehran was today the scene of angry anti-government protests, preventing Iran’s powerful ex-President Ali Akbar Hashemi Rafsanjani to call off his scheduled speech at the May Day gathering.

Eye witnesses said that some 20,000 workers gathered in and around the 12,000-seat stadium to mark May Day and chants of “The Majlis (parliament) betrays us, the leaders support them” could be heard throughout the crowd. 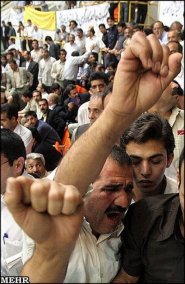 The event was originally organised by the government, however it soon became the scene of hostilities towards the regime’s clerical rulers.

Iran Press News is also reporting on the protest:

Iran’s resilient workers gathered today in Freedom Stadium, chanting anti-regime slogans in a regime staged celebration of May 1st World Worker’s Day; they chanted: “Referendum, Referendum, this is the motto of the people.”

This stunt, orchestrated by the nefarious Rafsanjani himself turned out to be nothing more than ploy for Rafsanjani to exploit as a campaign “whistle stop”. The announcement of Rafsanjani arrival for a speech further angered the protesting workers, forcing Rafsanjani to abort the speech. Based on reports despite all efforts by the regime’s security forces, the situation quickly spun out of their control.

the regime’s news outlets, FARS, confessed that due to the widespread protests of the workers against the regime: “The agitation inside the 12000 person arena against Has Rafsanjani’s appearance forced him to cancel.”

The Tehran Times also report his no show at the event Saying, “Rafsanjani refused to attend the congress earlier on Sunday.”

And IranMania News Service is reporting on the unrest of the blue-collar Iranian workers against the regime:

A representative of Ilam’s blue-collar workers criticized the indifference of the officialdom towards the demands of Iranian laborers.

Ali Ghiyasi added that the protest rally of laborers should not remain concealed from related officials.

“Blue-collar workers have no other alternative but to voice their complaints by holding protest rallies ة The labor force wants temporary contracts to be revoked and real wages to be declared, but nobody is paying attention,“ he said.