Inflation is sinking the largest economy in Europe.

And that is not just a flashy headline. 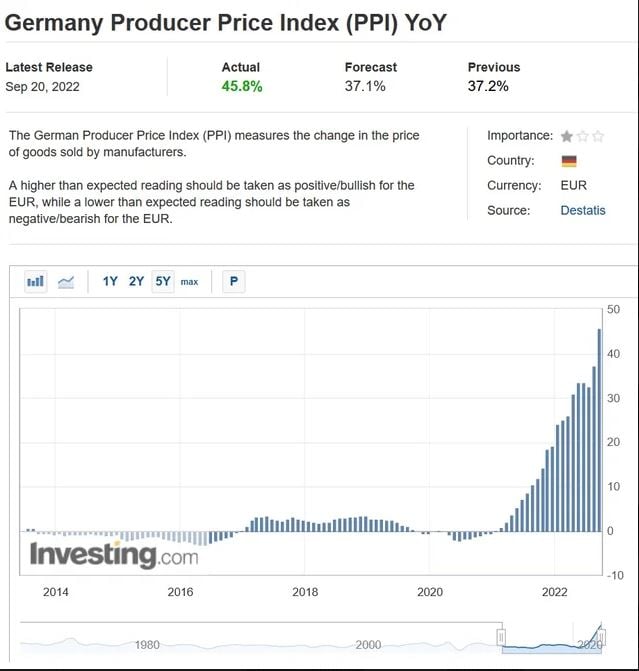 Via Steve Bannon on GETTR.

The Producer Price Index in Germany is up almost 46% in August driven by the soaring energy prices.

Peak #inflation? Not in #Germany! German Consumer Prices (CPI) are likely to rise further after Producer Prices (PPI) increased by almost 46% in August, the strongest increase since 1949. pic.twitter.com/AKv5ofYzCn

The statistics behind the energy impact upon the German economy, the largest economy in the European Union, are almost unfathomable in scale. There is no way for the German industrial economy to continue with this level of price pressure. Stick a fork in the current creation of German industrial products and exports, the inflection point of feasibility for continued production has been crossed. They are done.

According to release statistics from the German economic ministry, energy prices in August were more than double the same period last year, up 139%. The monthly increase was more than 20.4% higher than July. Additionally, producer prices for electricity rose 174.9% compared with August 2021 and by 26.4% in a single month.

This jaw-dropping increase in energy cost has resulted in German manufacturing prices for industrial goods jumping 7.9% in August alone, with a year-over-year increase in the cost to manufacture goods at 45.8%. That is the highest rate of price increase since Germany began recording their statistics in 1939.