Fauci led the disastrous COVID response in America that resulted in the most deaths in the world and major economic destruction at home and abroad.

Obama is thankful Fauci still has more time to promote death and pseudoscience before leaving office.

“Few people have touched more lives than Dr. Fauci — and I’m glad he’s not done yet,” the former president noted.

Compliant double and triple boosted leftists showcased their warped, ill-informed paradigm of the world and joined Obama in celebrating Fauci for saving lives.

Fauci issued a statement on Monday announcing he will end his 50-year tenure at the National Institute of Allergy and Infectious Disease in December.

“I am announcing today that I will be stepping down from the positions of Director of the National Institute of Allergy and Infectious Diseases (NIAID) and Chief of the NIAID Laboratory of Immunoregulation, as well as the position of Chief Medical Advisor to President Joe Biden,” Fauci noted.

“I will be leaving these positions in December of this year to pursue the next chapter of my career,” he added. 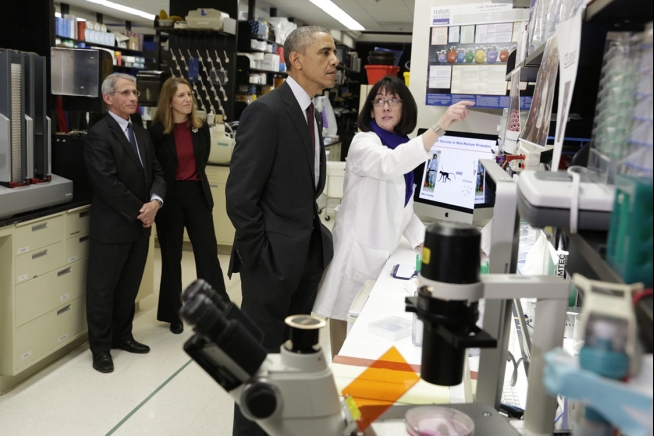 Obama tours a lab at the Vaccine Research Center at the National Institutes of Health with Fauci on Dec. 2, 2014.

Fauci’s resignation announcement came less than 24 hours after Sen. Rand Paul, R-Ky., vowed to investigate the origin of COVID-19 when the GOP takes control of the US Senate in 2023.

UPDATE: Dr. Fauci Announces Resignation ONE DAY After Sen. Rand Paul Promises to Get to the Bottom of COVID’s Origins …With Update

“I think most of the mainstream media has kept off of the airwaves a discussion of gain-of-function research or the origins of the virus, but we will get to the bottom of this,” Paul told Just the News on Sunday.

In December, Paul pledged to put bring Fauci to justice, warning, “Fauci should go to prison for five years for lying about the origins of the COVID virus.”

Fauci’s resignation will not prevent a full-throated investigation into the origins of the pandemic,” the Sen. Rand Paul told Fox News on Monday.

Several GOP lawmakers threatened to hold Fauci accountable following news of his departure, warning the NIH director’s decision to leave his government post won’t shield him from US Senate investigators.

“Few people have touched more lives” is an interesting phrasing of “destroyed.”