Man may not live by bread alone, but you cannot deny it is a damn important part of the diet of millions in the world who are not trying to be gluten free. Look carefully at the following chart: 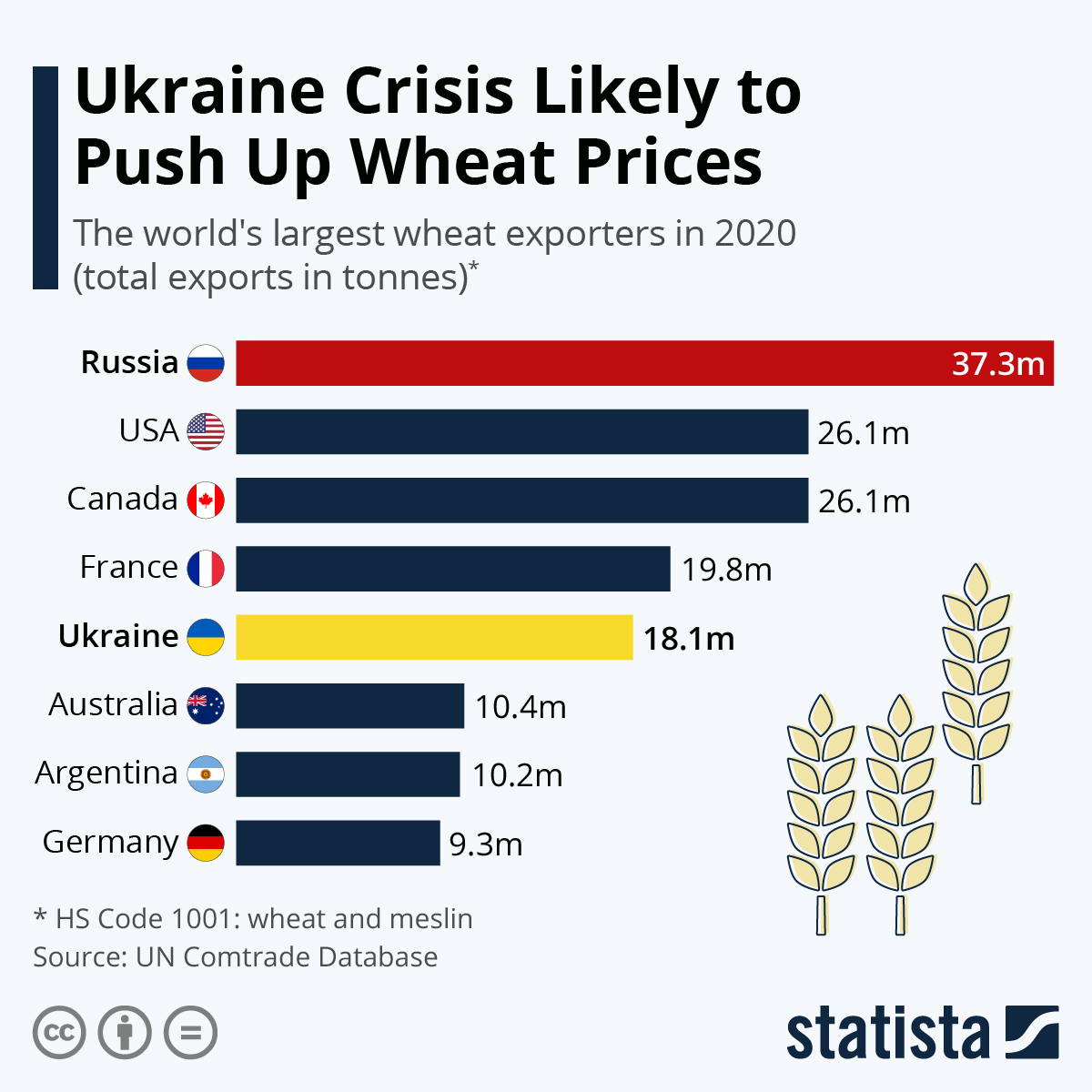 Let me help you with the math–Russia and the Ukraine combined accounted for 33% of all wheat exports among the top ten exporters. Russia exports more than the United States. Let that sink in for a moment.  Russia’s invasion of Ukraine is highly likely to disrupt Ukraine’s ability to fully plant and harvest wheat in 2022. And Russia will be blocked, in theory at least, from being able to accept U.S. dollars for its wheat export. On March 9 President Putin signed an order banning the exports of some goods and raw materials:

While wheat is not mentioned specifically in this order, those who have bought wheat from Russia in the past will need to consider very seriously whether they will be able to buy Russian grain this year. There are two possible terrible scenarios. First, because of the war Ukraine will not be able to plant its crop. No crop, no exports. Second, Russia will keep all of its wheat at home to ensure its citizens have enough to eat. That means those parts of the world that depended on Russia as its grocer will have to find an alternative supply and will have to pay substantially higher prices if they can find another country able to fill the demand.

But that is only the beginning of the looming agricultural disaster for the anti-Russian world. One word–POTASH. Potash is a key ingredient in producing fertilizer.

The potash component corrects the deficiency of potassium in the soil. As a natural mineral, potash is an important nutrient that enhances water retention, disease resistance and general crop productivity.

So take a close look at the following chart:

The World’s Leading Producers of Potash

Russia and Belarus account for 37% of the top ten producers of potash in the world. Belarus has been sanctioned and its potash supply will not be available to the world. With Russia now added to the mix the world is looking at a major deficit in having fertilizer to put on crops. The price of fertilizer already has doubled compared to a year ago. That means farmers in the Midwest who are planning to plant corn and soy beans will be paying twice as much for fertilizer. And that is not all. The price of diesel fuel–i.e., the juice that makes tractors, planters and harvesters run–also has doubled.

When it comes to oil, wheat and potash Russia is holding some powerful trump cards that can be used to hurt the West and its erstwhile allies. I would suggest the time has come for those Americans blinded by their hatred of Russia based on a false narrative peddled recklessly by a pliant media, to take off the blinders and take a serious look at the implications of a fast approaching future where key Russian and Ukrainian exports will not be available. There is one guarantee for the world–rampant, high inflation.

Larry Johnson
NATO Announces It Will Move Troops to Western Border of Ukraine and Other Developments
Back to the Future in Ukraine–Demilitarization and Denazification
Understanding the NY Times Article on the CIA in Ukraine
Even the UK’s Sky News is Reporting on the Ukrainian Debacle in the Donbas
Understanding the Ukrainian SS Galicia Division Helps explain UK and Canadian support for Ukraine
See more...