The more things change, the more they stay the same.  In 2014 the State Department’s Victoria Nuland reportedly was caught on tape planning a coup in Ukraine using Biden’s help.

Victoria Nuland is currently serving as Under Secretary of State for Political Affairs in the Biden – Obama Administration but she was with the State Department under Obama as well.  She was instrumental in the affairs in Ukraine at that time.   We’ve written about Nuland in the past, especially when it relates to Ukraine.  Recently when Nuland was before the Senate no one asked her about her past actions with the Obama gang.

But back in 2014 Nuland was very busy in Ukraine.  She was seen passing out cakes to protesters in Kiev, Ukraine at that time.  A few weeks after this the protests in that country got violent and a number of individuals died during these riots. 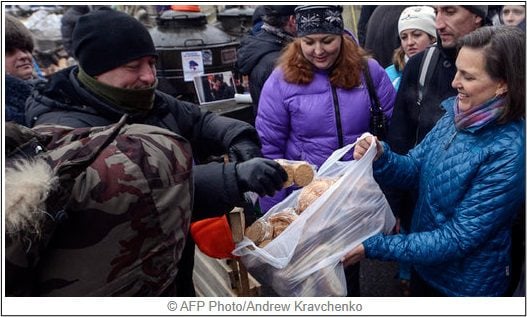 At this time, Nuland made a call with another American, Jeffrey Pyatt, to discuss the events in Ukraine.  She mentioned Jake Sullivan in the call as well as Joe Biden.  In their phone conversation, Nuland and Pyatt discussed who should join a unity government. Nuland notified Pyatt that after the review of the three opposition candidates for the post of Prime Minister of Ukraine, the US State Department had selected Arseniy Yatsenyuk. Joe Biden was involved in their decision.  It was a coup.  The Americans had picked their candidate.

The video below from that time discusses the call and the actions in Ukraine at that time. See below starting at about the 14:00 minute mark.

Joe Hoft
Joe Hoft is the twin brother of TGP's founder, Jim Hoft, and a contributing editor at TGP. Joe was instrumental in reporting the truth behind the Mueller sham, the origins of COVID-19, and the 2020 Election fraud. Joe was a corporate executive in Hong Kong for a decade and has years of experience in finance, IT, operations, and auditing around the world. Joe is the author of five books. His new bestseller, "The Steal: Volume II - The Impossible Occurs" is out now. It addresses the stolen 2020 Election and provides an inventory proving that the 2020 Election was uncertifiable and never should have been certified for Joe Biden. Joe also has a weekly radio podcast at TNTRadio.live where he discusses current events with prominent guests.
@joehoft
The FBI Is Targeting Trump Supporters as Domestic Terrorists Proving Again that the FBI Is Arguably the Greatest Threat to Our Democracy
Trump Organization Found Guilty in New York Kangaroo Court for Not Taxing Some Fringe Benefits While Crime in the City Explodes
ROGER STONE EXCLUSIVE: Adam Schiff Can't Stop Lying
It's Time to Give President Trump Credit for His Courage and Persistence in Bringing to Light the Election Steal
BREAKING EXCLUSIVE: Big Tech Censorship Is the Largest Campaign Finance Violation in History Costing Americans Billions and Potentially Trillions
See more...