Time to clean up the messy reporting on Alec Baldwin’s negligent shooting of cinematographer Halyna Hutchins and director Joel Souza. We still do not know what firearm was used, but the film was being shot on a movie set used principally for 19th Century westerns–Blazing Saddles and Jimmy Stewarts’ The Man From Laramie. So it is highly likely that Baldwin was shooting a revolver and not a semi-automatic pistol (e.g., Glock, Sig Sauer, Berretta).

Semi-automatic pistols are a 20th Century invention and became a staple of military equipment after World War II. There are two types of revolvers–Single Action and Double Action. Single Action means that when you pull the trigger the hammer is released and the gun fires. This was in widespread use in the West during the cowboy era. The cylinder that holds the ammunition is not easily removed and you must open a loading gate to insert only one round at a time into the revolver. Double Action is what most people associate with a revolver. That means when you pull the trigger it cocks the hammer and then, as you continue to apply pressure to the trigger, releases the hammer and fires the pistol.

If a revolver was used by Baldwin then a negligent discharge is not an “accident”. It is negligence. Whoever loaded the revolver handled each round. If the person loading the gun was paying attention, it is impossible to “accidentally” load a live round.

A round of modern ammunition has four components:

Blank ammunition does not have a bullet. Therefore, if you are loading blanks you will not see a bullet poking out of the end of the shell casing. Blanks are not harmless. A blank round will propel a plug and gunpowder when fired. If you fire a blank from a pistol pressed against a person’s head the force of the explosion is enough to kill a man.

Compare a blank 44 pistol caliber with a regular 44. The following is a 44 blank:

And here is a live 44 caliber round:

If you are paying attention and are knowledgeable about a 44 caliber pistol, you will not confuse these two rounds. The brass is crimped in the 44 blank. The bullet is clearly visible in live 44 round.

There are four fundamental rules for gun safety:

We know this for certain–Alec Baldwin did not inspect the gun to verify it was unloaded, he pointed the gun at a person he did not want to kill and the round he fired continued downrange and struck the director.

There are two different stories circulating about the fatal wound suffered by Halyna Hutchins. According to a crew source communicating with Jack Posobiec, the bullet struck Halyna in the abdomen, then exited and struck director’s shoulder, who was crouching behind her (this is from Jack’s Telegram channel).

The B-camera operator was on a dolly with a monitor, checking out the potential shots. Hutchins was also looking at the monitor from over the operator’s shoulder, as was the movie’s director, Joel Souza, who was crouching just behind her.

Baldwin removed the gun from its holster once without incident, but the second time he repeated the action, ammunition flew toward the trio around the monitor. The projectile whizzed by the camera operator but penetrated Hutchins near her shoulder, then continued through to Souza. Hutchins immediately fell to the ground as crew members applied pressure to her wound in an attempt to stop the bleeding.

This was not the first incident of unsafe gun handling. The LA Times also reports:

Baldwin’s stunt double accidentally fired two rounds Saturday after being told that the gun was “cold” — lingo for a weapon that doesn’t have any ammunition, including blanks, two crew members who witnessed the episode told the Los Angeles Times.

“There should have been an investigation into what happened,” said the crew member. “There were no safety meetings. There was no assurance that it wouldn’t happen again. All they wanted to do was rush, rush, rush.”

A colleague was so alarmed by the prop gun misfires he sent a text message to the unit production manager. “We’ve now had 3 accidental discharges. This is super unsafe,” according to a copy of the message reviewed by The Times.

This was not a “misfire.” A misfire means when you pull the trigger you hear a click but no bang. The ammunition malfunctioned or the firing pin on the pistol is not working properly.

There also is no such thing as an “accidental” discharge. If a firearm is fired unintentionally it is negligence. Gun accidents are caused by only two things–ignorance and/or carelessness. If you are holding a pistol, it will not fire unless you put your finger on the trigger.

A talented cinematographer is dead because at least two people did not follow the fundamental rules of gun safety–Alec Baldwin and the Assistant Director who handed him the firearm with live ammunition loaded. Then there are questions to be answered by the armorer (the guy or gal in charge of ensuring the firearms and ammunition are properly stored when not in use and properly loaded with blank ammunition) and the person in charge of props.

The worst thing you can do when handling a gun of any kind is to assume it is unloaded and safe. It is that kind of negligence that gets innocent people killed. That’s what happened in New Mexico to this poor woman.

Based on a picture posted at the New York Post, Baldwin was using a single action revolver. 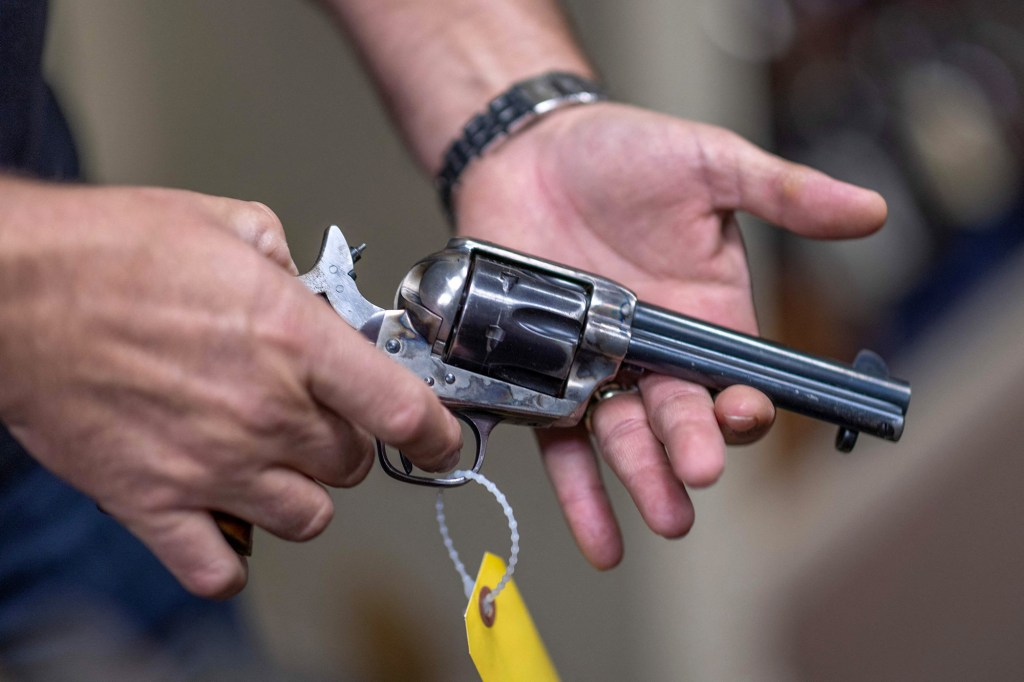