A Cesspool is a filthy, disgusting, or morally corrupt place. Perfect description of Washington, DC. Jacob Dreizin is a US Army vet and has written the following, which provides an excellent report on the current conditions in DC.

Some folks wanted to know who I am before forwarding my work, make sure I’m not a lunatic—fair enough!  I am 43 years old, a U.S. Army veteran, two Masters degrees, Deplorable, a GOP “donor” (into the five figures since 2017, won’t give another cent until the party gets its head out of the sand), an immigrant, married to an immigrant, a father of three, living with my wonderful family in northern Virginia, 18 miles from Washington, DC.  Naturally, I have to keep this newsletter far apart from my day-job.  In line with that, I don’t have a Twitter or Facebook or any other social media account or web presence, besides some pieces I got published on various blogs.  But I got tired of dealing with editors who usually don’t respond.  Now, doing it my way.  Thanks for reading!

You wouldn’t know it from (lack of) news coverage, but Washington, DC, our nation’s capital, has become a dump, a real disaster zone.  Few know that DC had the toughest virus rules in the country.  By law, you had to (maybe still do) wear a mask outside at all times.  Between the suburb dwellers working from home, the virus closures, the BLM riots, and the Inauguration “army show” and road closures—when the only doors open for a week in three square miles of downtown were McDonalds, 7-11, and a few coffee shops—they killed the city.

Two-thirds of ground-floor “storefront” businesses downtown—restaurants, cafes, banks, the odd financial advisor or asset manager—have closed, most of them permanently.  Even the Starbucks near the World Bank has closed.  When Starbucks checks out, you have a problem. 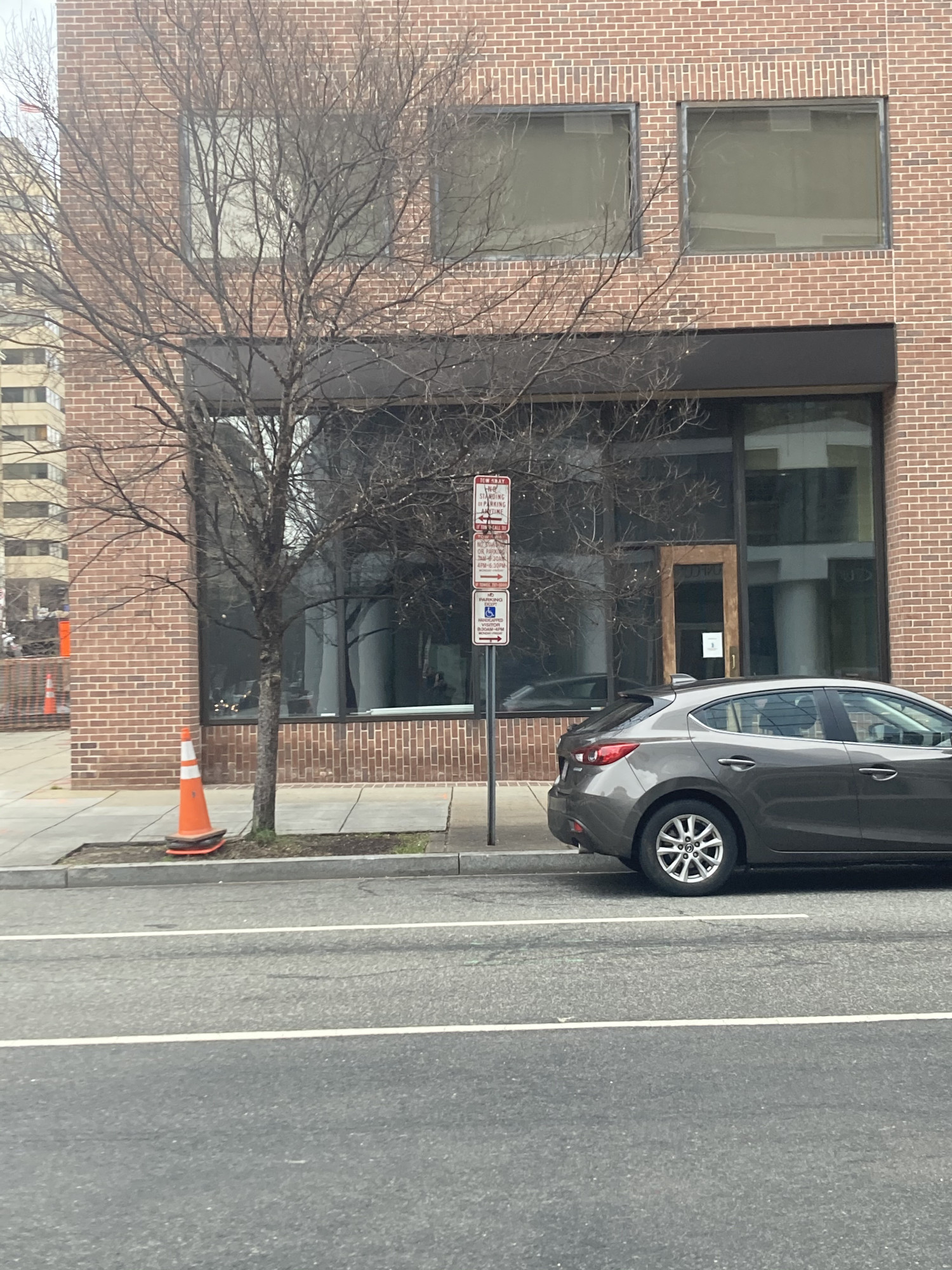 I spent 15 minutes recently at the Hilton on 16th Street and did not see a single customer, only two employees doing nothing.  The hotel restaurant and almost everything but the elevator lobby were roped off.  Closer to the White House, the damage to city property from last year’s BLM riots has not been repaired.  The city is short on taxes and evidently tapped out.  It has no money but what it can get through Federal bailouts.

Here is the White House. 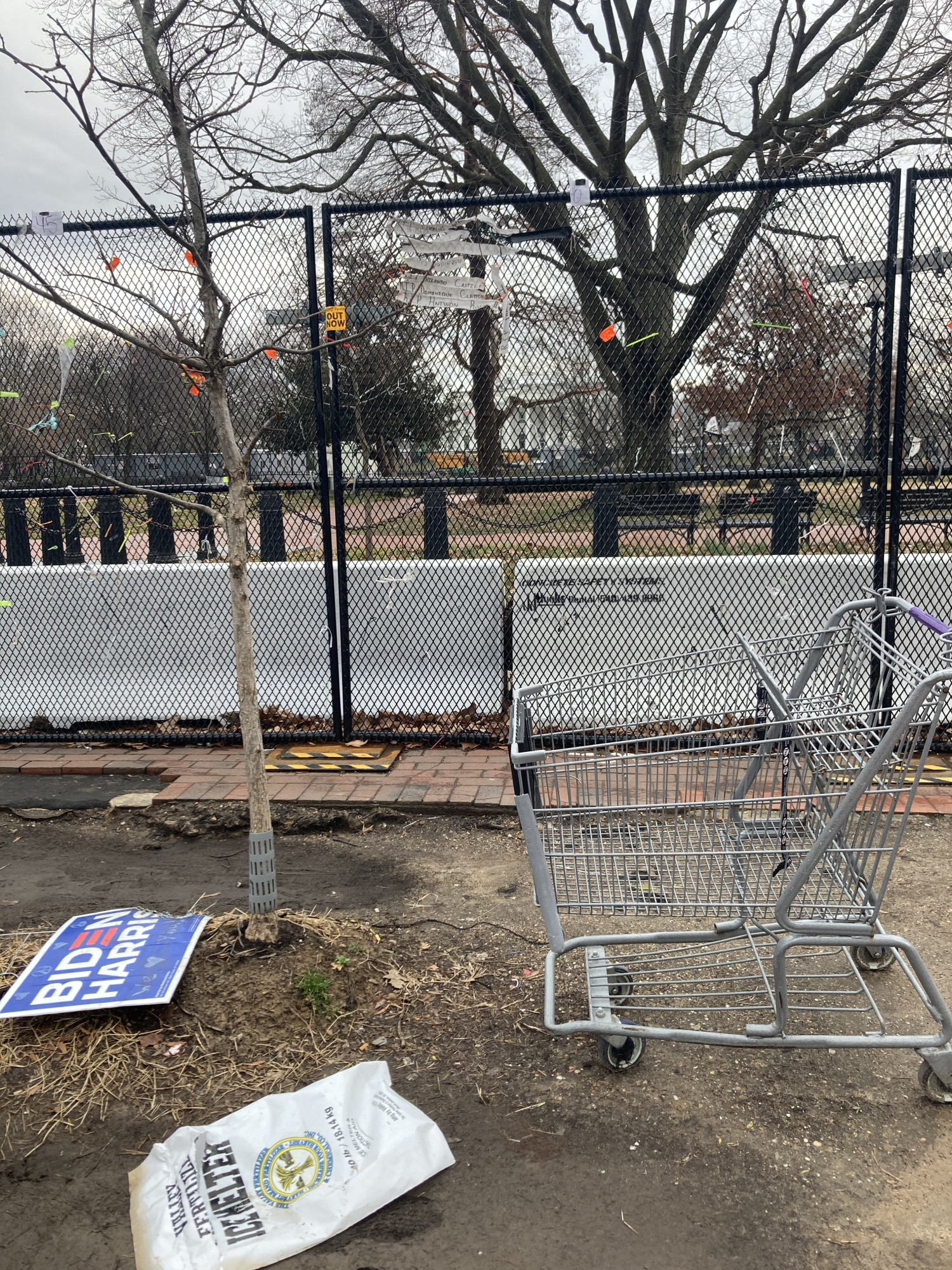 This is disgusting.  My wife’s little country (near Afghanistan) keeps it nicer around their presidential palace.  It looks like the homeless forgot some of their stuff here.  What you can’t make out in the photo are three rows of fencing (in addition to the cement barriers) fronting the White House, because two aren’t enough, as well as leaves plastering Lafayette park that, from the looks of it, have not been collected since late October.  Either DC doesn’t have the money, or they can’t get their discount migrant leaf-blowers past security.

Here is another photo of the same spot, from a different angle. 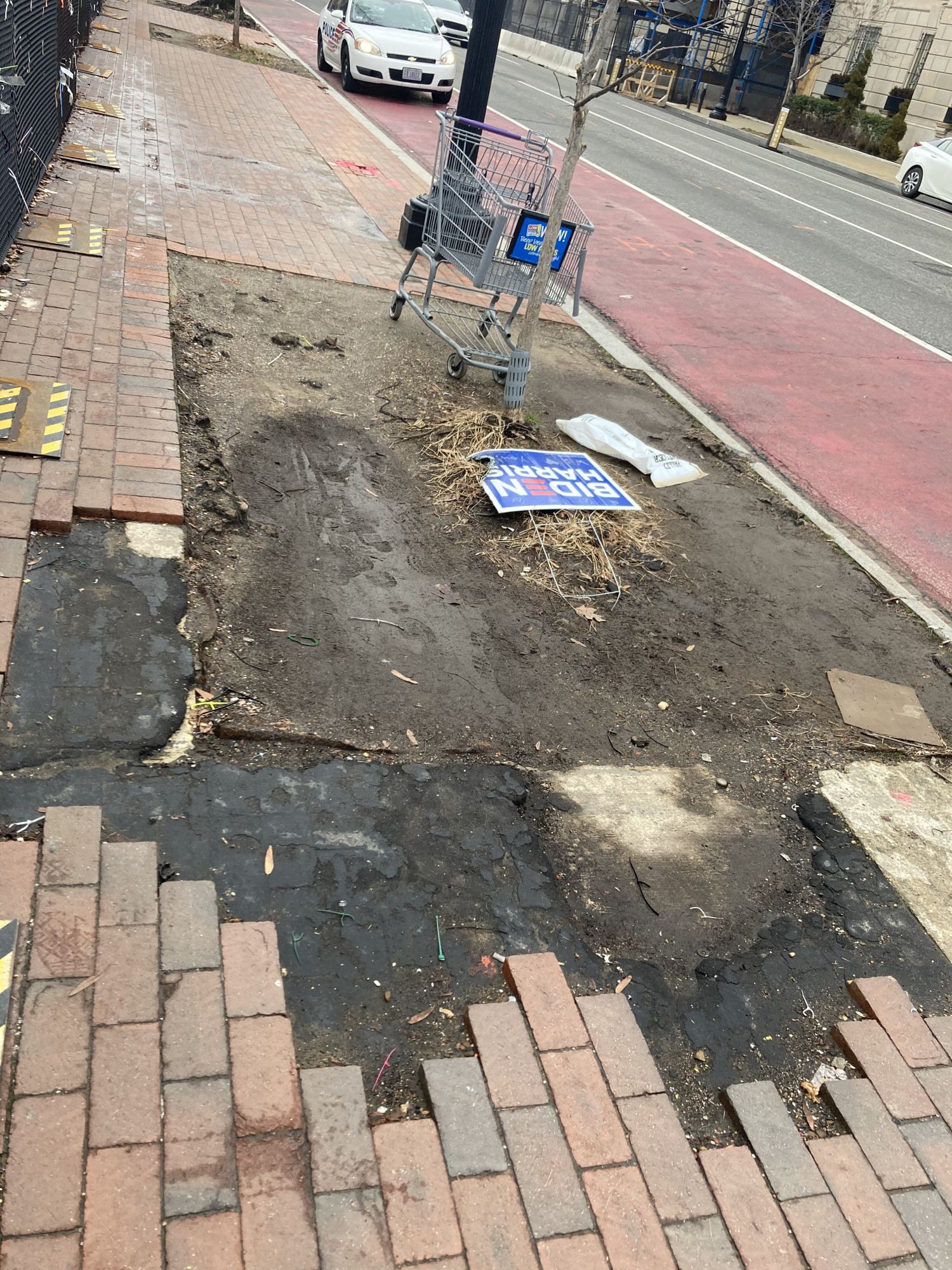 Notice the missing half-brick pavers?  Here are some more. 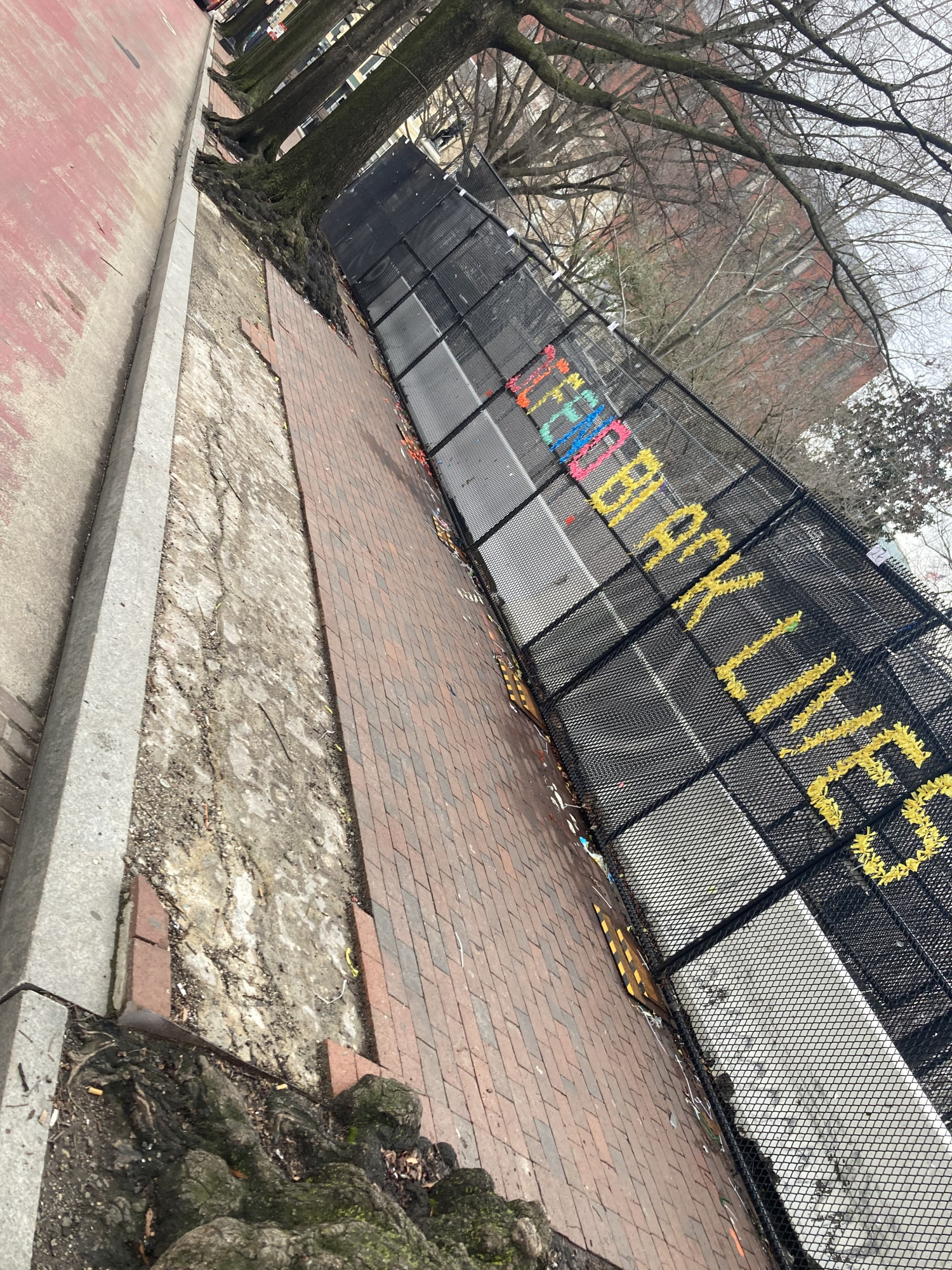 They were torn up during the May 31st, 2020 BLM riot, to be thrown at the U.S. Secret Service and Park Police who defended the White House that evening.  There’s a video of the Federal line being pelted with a hail of masonry.  It was nine months ago.  That was closer to a real “insurrection.”  The DC Police bailed, they were nowhere to be found.  (Unlike the Capitol, this is city property, DC has jurisdiction here.)

Here is the now-famous, liberal “church” (using the term loosely) administrative building that was partially gutted during the May 31st riot. 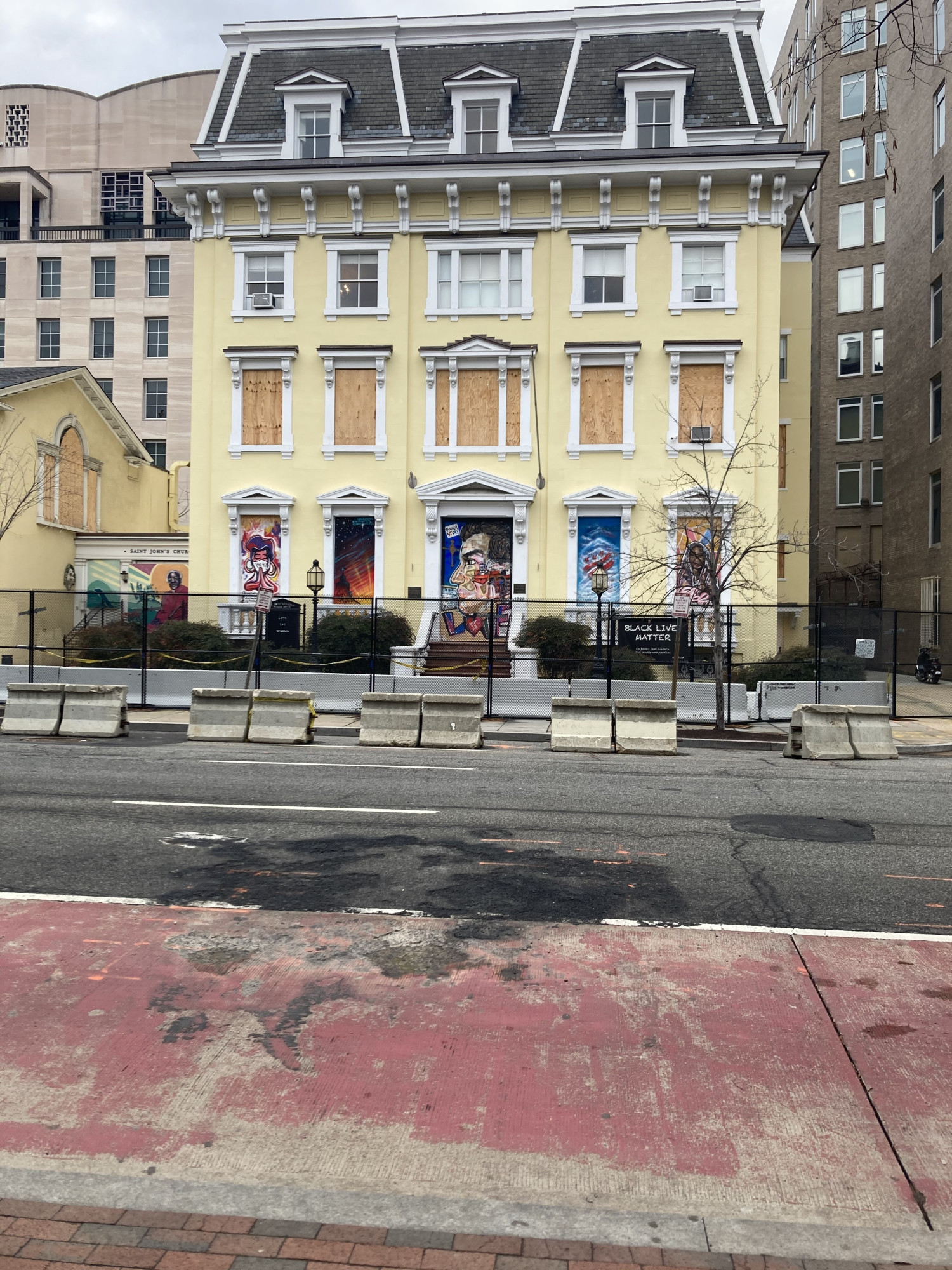 It is across the park from the White House.  Is this a church or a zoo?  The fire is going on nine months old—why the fencing and cement double-barriers now?  To protect whom?  I worked around the corner for years, never saw anyone walking in or out of there.  Moreover, the rioters got the president they wanted; who’s going to burn it a second time?

As for the road damage in the foreground, you can’t see but it’s too deep to be from a burning car, there are holes several inches deep.  I think it was morons trying to chisel pieces to throw at the Feds defending the White House.

As it came out later, DC’s Democrat mayor let her police give some shields and helmets to the Feds, but she wanted no public role in defending Trump from the (90 percent white) BLM/Antifa mob, whom the Fake News called “peaceful protestors.”  Her police stayed so far clear of the White House that, in fact, several blocks north and east were left to the mercy of the mob.

The Department of Veterans’ Affairs headquarters (Federal property) has fixed its broken windows, but you can still see marks on the asphalt where two cars were burned on the VA’s I Street side.  Here, you can see that one fire spread to a small tree, which had to be cut down. 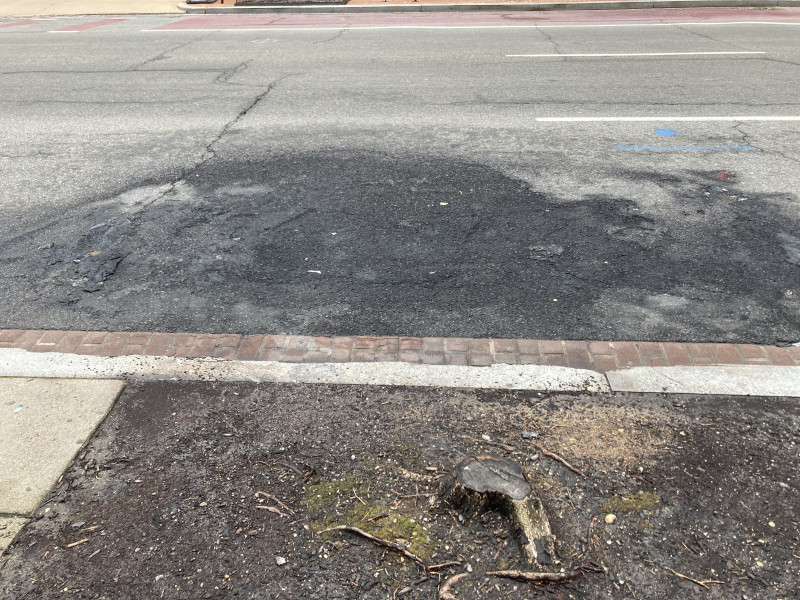 Here, you can see what is perhaps a melted windshield that someone carved off one burned car and dumped on the sidewalk.  It will soon be nine months.  It’s still there. 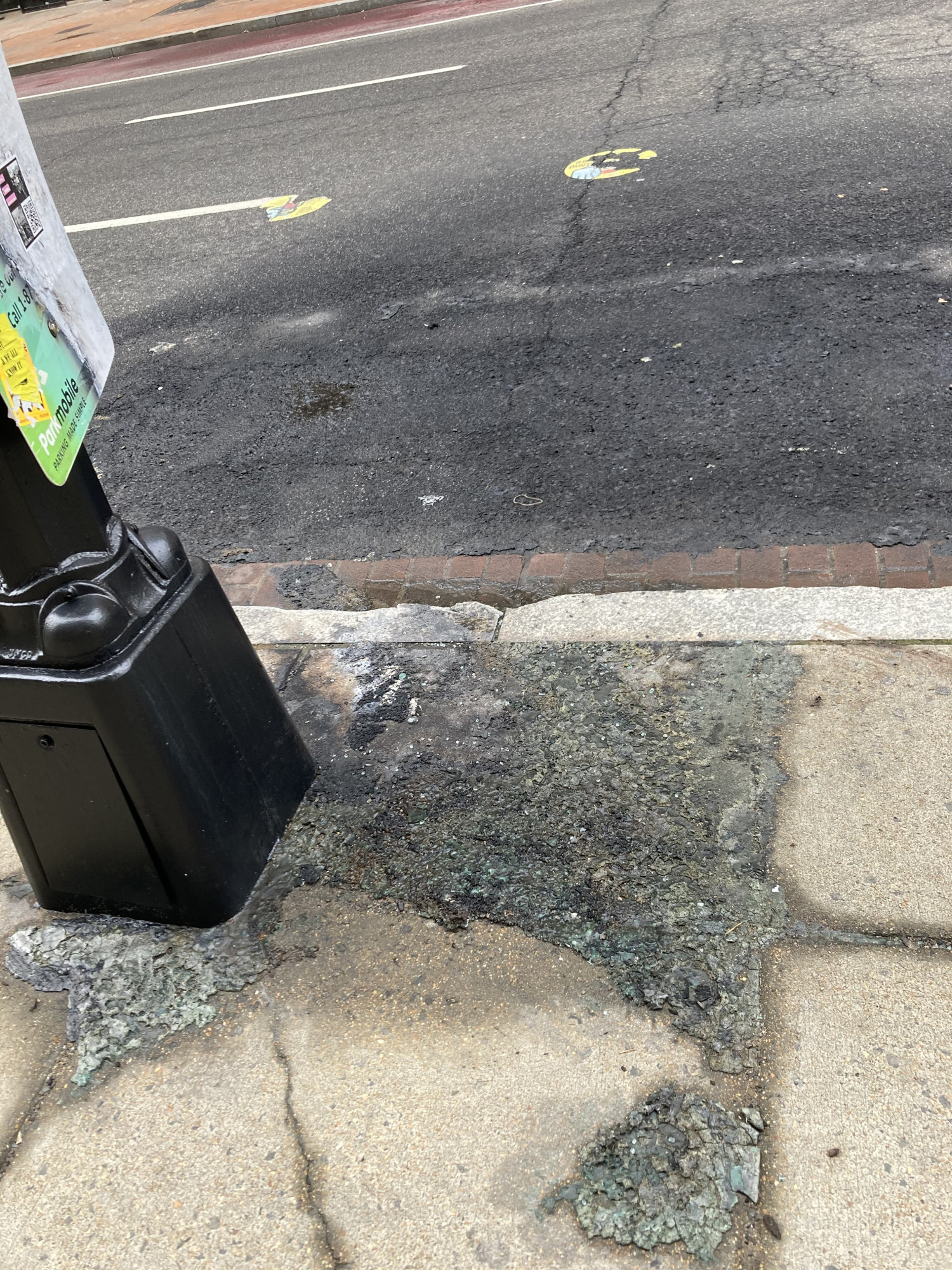 Here is a smashed ATM, a minute’s walk away.  (At this spot, based on graffiti I saw there in June, Antifa had set up a “water point” for rioters to rehydrate.)  Nine months old.  A veritable open-air time capsule! 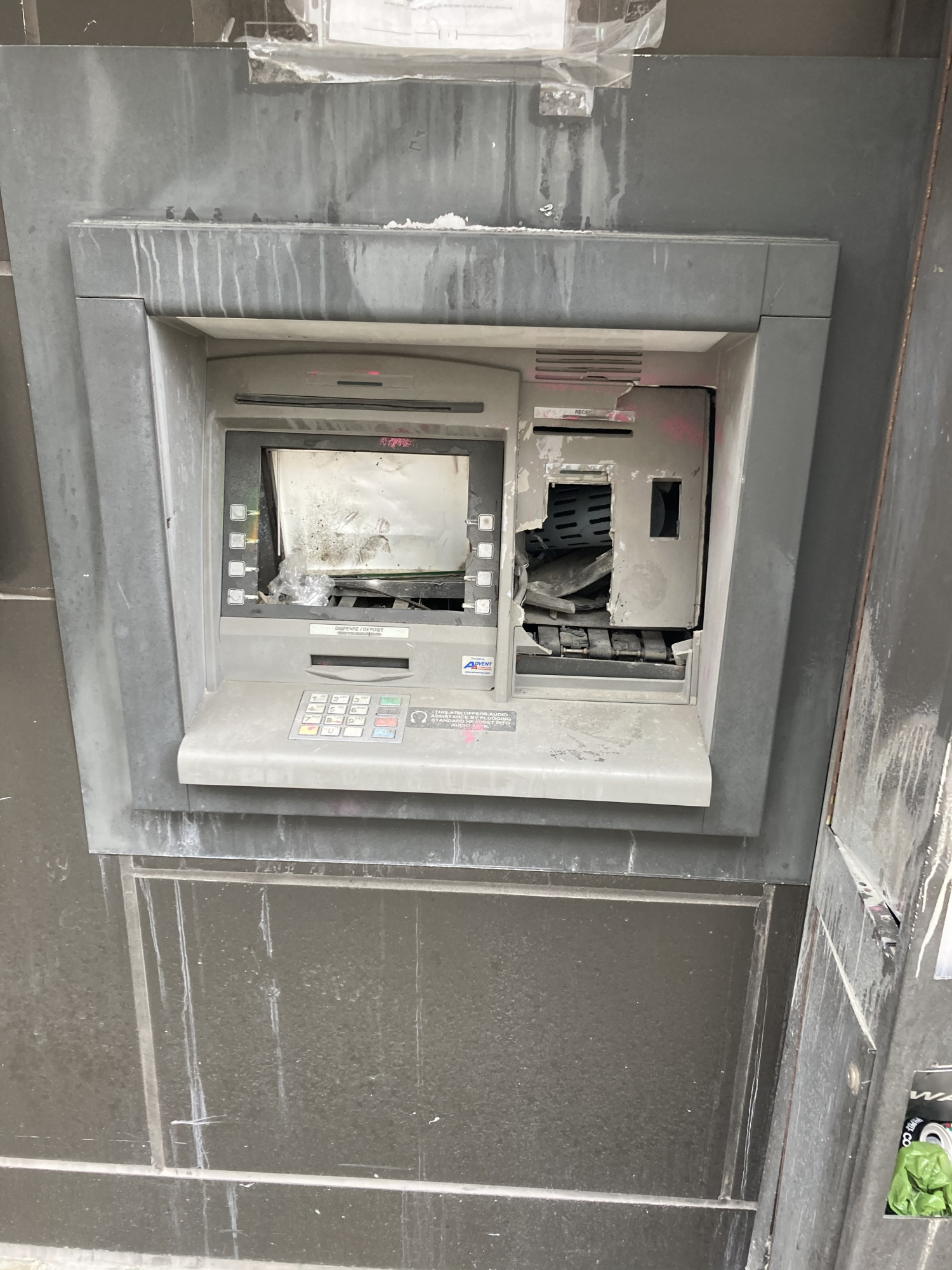 It was all just a game to the media, even local media

The Washington Post glossed over the damage in passing; they did not think much of it.  Didn’t seem important to them, in their own hometown.  It didn’t help their cause.  It would have helped if Trump’s Feds had done something crazy, like opened fire.  Short of that, it wasn’t worth more than a couple sentences—if that—of newsprint.

The Fake News cheered and ran interference for these “peaceful protestors” the whole time (the night of May 31st was but the wildest moment.)  An overreaction would have ended Trump’s presidency, right then and there.  They wanted a Kent State at the doorstep of the White House.  They had former SecDef Mattis publicly lined up to speak for a generals’ coup, the moment things got out of hand.

You can see how Trump was on a tightrope, and on top of that, around June 2nd, the mayor began harassing the National Guard he had brought in, trying to deny them hotel space and get them out of town.  It was just a few thousand of them, not 26,000 as for Biden’s inauguration last month.  You see the difference between then and now.  Future presidents take note:  Republicans in this town are denied equal protection of law.  But we knew that from the last four years.

Here you can see a two-block stretch of 16th Street that—save for the I Street intersection—has been closed off indefinitely to protect the “Black Lives Matter” slogan hastily painted on June 5th. 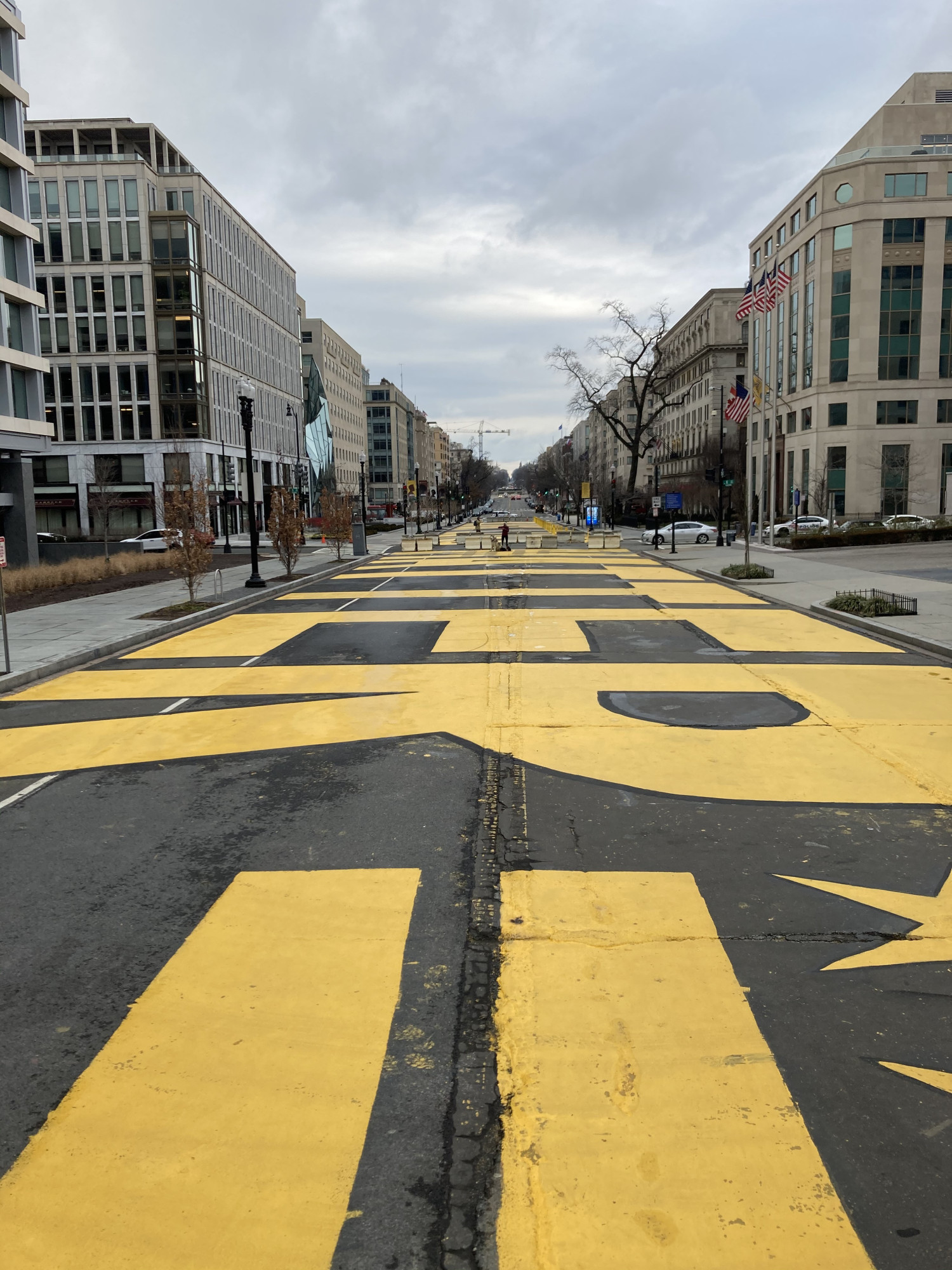 “Black Lives” is on one side of I Street and “Matter” is on the other.  Why 16th?  Because it is precisely lined up and perpendicular to the White House, a big “F.U.” to Trump from June 2020.

Initially, the road was open but there was a posse sitting on lawn chairs under a tent awning near the intersection, smoking marijuana in broad daylight, guarding against anyone defacing the words (as had happened in New York.)  I don’t imagine that was covered in the Fake News.

That didn’t last long until the two blocks were closed off with rough-looking cement barriers, with the city declaring it a “pedestrian mall”, to be known as BLM Plaza, a designated space for public demonstrations, supposedly.  The road closure doesn’t prevent defacement, but it keeps the words looking fresh.

Really, it seems they are just protecting the paint from traffic.

No, I don’t feel threatened by the words; more power to all my black brothers and sisters.  But please tell your Democrat friends that the world was not “laughing at us because of Trump.”  I scan the foreign press more than the average Democrat and I can tell you, the world was and is laughing at us, period.

Next GOP prez: Get out of DC

In this post-Cold War, post-War on Terror political climate in which Americans once again see other Americans as enemies to be defeated, cleansed, and/or reeducated, it is no longer safe for any Republican administration to be engaged in Washington full time.  It would not be protected, and if it sought to protect itself, it would be condemned and sabotaged to the point of stirring up a high-level military mutiny, as per the Democrat script from early June 2020.

Any future Republican president should rent a resort or some rural hotels in Michigan or Indiana, and call them his or her capital for four years.  He should not be in DC at all.  It’s like Afghanistan—stop trying to conquer it, just leave it behind.  Move the Executive Office of the President (EOP)—the National Security Council, OMB, OPM—as well as all agency headquarters offices and the brass out there.  Put everyone on teleconference.  Make the underlings travel to the Heartland to report.  Make them spend their lunch money there.

Why should our capital be on one far edge of the country, anyway?  This isn’t 1787.  And, we’ve had “remote” government for a year now; there’s no need for DC.  You can’t legally move all the unionized petty bureaucrats, nor can you spend on new buildings without Congressional approval, but there is likely enough slush money in the EOP budget (might have to cut down on Air Force One travel and foreign summits) to temporarily relocate everyone of importance to anywhere you want.

Again, the leftists in this toxic town have proven that they will not protect Presidential administrations and politicians equally across parties.  They will use their moron foot-soldiers to bring you down, running cover for them in the national media, while condemning your own directionless morons (if you have any) as “domestic terrorists.”

As for you, dear reader, DO NOT COME TO WASHINGTON, DO NOT SPEND YOUR MONEY HERE.  THEY REALLY, REALLY HATE YOU HERE.  THIS IS “ENEMY TERRITORY.”

As a Deplorable or any Republican, if you wish to protest Federal policies, do so at a Federal courthouse, agency regional headquarters, or other facility in your state or community.  Don’t ever come spend your money in DC.