The media and the political establishment are collaborators in an effort to steal the Presidency from Donald Trump and to create the meme that will serve as the casus belli for continuing to assault the legitimacy of the Trump Presidency. There is no evidence other than suspect polls that Biden is wildly popular. There are no other metrics that support the claim that Biden is a popular alternative to Donald Trump. Financial contributions flooding Democrat coffers come largely from Mega Donors. Where are the flood of Biden volunteers canvassing neighborhoods? Where are the masses of Biden signs and flags? Where are the masses of wild Biden fans lining up for hours to see their crotchety scold?

The evidence of enthusiasm and support for Donald Trump–once you step outside the Potemkin Media Villages of Washington, DC, New York City and Hollywood–is unprecedented and stunning. Most importantly, the evidence is tangible, empirical. Even Helen Keller could see the thousands of truck  and car cavalcades, tractor processions, boat parades, golf cart spectacles, and Amish buggy rallies–all festooned with Trump banners, American flags and signs proclaiming love for the Donald–that have flowed across our roads and waterways in the last couple of months.

Then there are the Trump rallies. Over 1 million people have stood in line for hours and braved inclement weather to listen to Donald Trump. This photo of the Butler, Pennsylvania rally is not a fluke. It is a routine turnout for Donald Trump.

Compare that to Biden’s gatherings. I’ve seen more people at a funeral parlor viewing the remains of a homeless guy. 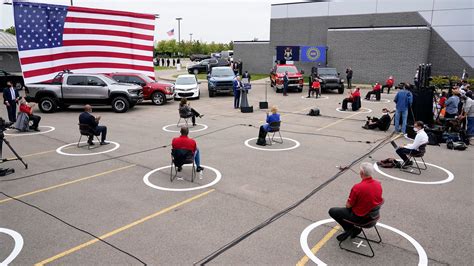 Media outlets, such as USA Today, push the nonsense that Joe Biden and Kamala Harris are discouraging attendance because of Covid. Yet, they trot out celebrities like Jon Bon Jovi and Lady Gaga and still fail to attract much of an audience.

The same pattern is repeated on the internet. The number of people tuning in to watch a Trump event online dwarfs those signing in to hear the incoherent ramblings of Joe Biden.

It is imperative that you understand the malevolence and danger that this media propaganda campaign poses to our Republic. The mainstream media and Washington establishment are engaged in a massive propaganda operation worthy of a CIA covert action plan–i.e., convince the public that Biden is a guaranteed winner and that Trump has no chance. Their first goal is to condition the public that this lie is true. Once the lie is accepted then they have laid the foundation for violence when Donald Trump wins–i.e., the only way Trump could defeat Biden is by cheating.

We know the kind of poker hand the Democrats are holding. A good poker player pretends to have a lousy hand when she is sitting on a Royal Flush or Four Aces. Conversely, if that player is holding cards worth less than festering dog feces, he will try to bluff his opponents with big bets to signal that he has a guaranteed winner.

But we have seen the Democrat cards. They are not holding anything back. They have been exposed and are tipping their hands. They know Trump is likely to win. That is why the mayors in at least 9 Democrat governed cities are boarding up and preparing for Armageddon. If Joe Biden and the Democrats had this election in the bag–literally (i.e., you know, bags filled with manufactured Democrat votes), they would be busy prepping stages for massive celebrations and buying up all the champagne at Total Wine. But they are not.

One thing should be clear–the coup to stop Trump is not over and the sedition to thwart your vote continues. It is time for patriots to rally to the defense of the Republic.

The Democrats remind me of the German soldiers marching in this snippet from Band of Brothers. What were they thinking?