Paul Joseph Watson from Infowars detailed the latest smear by the liberal media.

This serves as a warning to anyone on the right. DO NOT open potentially malicious email attachments. The media will try to frame you for possessing illegal material even if you are the victim. Absolutely incredible.

*correction* – the media claimed Jones sent the emails to lawyers, not parents.

In fact, it sounds like other entities were spamming InfoWars emails with it.

Attorney Robert Barnes announced today on Infowars that he warned media outlets on Monday about possible libel suits for sharing the fake news about Alex Jones. 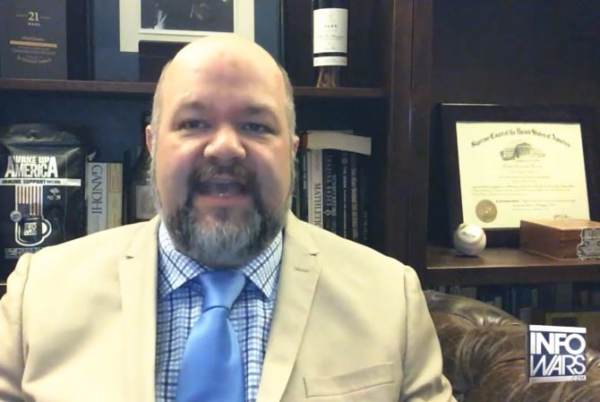 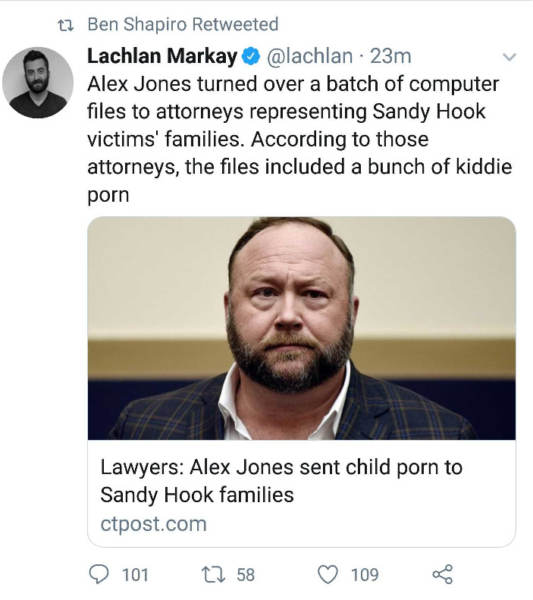 Wait Ben Shapiro spread lies about Alex Jones today too without looking into the situation?

You're kidding me, right?

You'd think he would have learned his lesson after Covington

Expected better from a Harvard grad

Jim Hoft
Jim Hoft is the founder and editor of The Gateway Pundit, one of the top conservative news outlets in America. Jim was awarded the Reed Irvine Accuracy in Media Award in 2013 and is the proud recipient of the Breitbart Award for Excellence in Online Journalism from the Americans for Prosperity Foundation in May 2016.
Liz Cheney's Jan. 6 Committee Subpoena 14 GOP Stand-In Electors to Testify Including Georgia GOP Chair
BREAKING: Chinese Ambassador Qin Gang Warns Military Action with US Likely if Taiwan Continues Down Road for Independence
EXCLUSIVE: Jan 6 Prisoner Jake Lang in DC Gulag Announces Hunger Strike Until Capitol Police Officers Are Arrested for Killing Ashli Babbitt and Rosanne Boyland
Top Pennsylvania Democrats to Skip Out on Joe Biden's Visit to Pittsburgh Today -- Due to "Scheduling Conflicts"
"Speaker Vos and the Legislative Body Have Ignored the Voice and Will of the People" - GOP County Leaders Call on Speaker Vos to Resign
See more...

Kachelman: When the Rule of Law Unravels