The holy cities of Karbala and Najaf lie south of Baghdad in Iraq.

The Iranian regime promised to send troops to Iraq if the holy shrines in Karbala and Najaf are threatened by ISIS.
Ria Novosti reported:

“President Hassan Rouhani said at a meeting with the government that Iran would deploy elite troops if there is a real threat of the IS approaching these cities [Najaf and Kerbela], in order to protect them. The intervention will be entirely coordinated with the Iraqis and aimed at liquidating the IS,” Fazli was quoted as saying by Entekhab.

Iranian forces are currently carrying out special drills involving aircraft and drones in case they are needed in Iraq, Entekhab reported.

The IS Sunni terrorist group made a name for itself fighting Syrian government forces starting in 2012. Two years later, the group launched an offensive in Iraq, seizing significant territory, including major cities and oilfields in less than a month. Local Sunni extremists and former servicemen in the regime of Saddam Hussein have joined the IS.

ISIS vowed to take Karbala and Najaf in June. 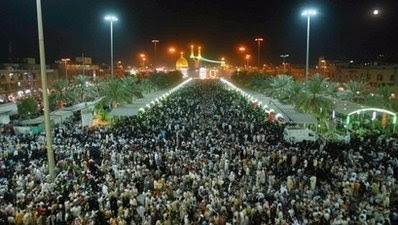 More than three million Shiites marked the annual pilgrimage to Karbala amid tight security and attacks on the way to the holy city that killed dozens of people in 2006. (AFP/Mohammed Sawaf)