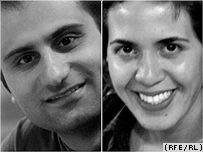 Two Radio Farda reporters were killed today in a car wreck in Prague. One other Farda reporter is in a coma after the crash.
Radio Free Europe Radio Liberty reported:

RFE/RL’s Persian-language Service, Radio Farda, is mourning the tragic loss of two of its finest journalists and praying for a third who is in a coma at a Prague hospital following a car accident near the Czech capital yesterday.

Rosa Ajiri, 27, and Amir Zamani-Far, 29, were killed in the early morning when their car was struck by a truck. Mahin Gorji, 43, is in a coma and a fourth passenger, a visiting journalist, was treated and released from the hospital.

Despite their relative youth, Rosa and Amir were widely respected for their courageous and resourceful journalism.

When an Iranian student died in custody during post-election protests in July, Rosa secured an exclusive interview with a friend of Javadifar’s who had seen his body and charged that he had been tortured.

Amir was a highly regarded radio host who was perhaps best-known by listeners for his signature sign-off each day on Radio Farda’s evening news magazine: “I wish you a peaceful night,” he would say in his baritone.

One of the last reports Amir filed was on the fate of jailed journalists in Tehran.

Mahin, who remains in critical condition, was one of Iran’s best-known sports reporters before joining Radio Farda. She covers politics and excels at securing interviews with top Iranian political figures and dissidents.