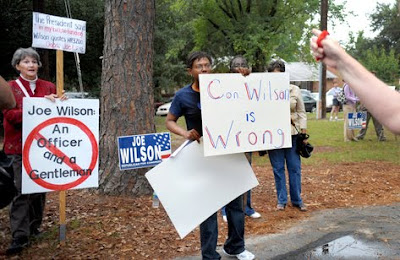 Truth Czar Rep. Joe Wilson told supporters in Aiken, South Carolina on Saturday that he would not be muzzled. The ‘tell it like it is’ representative told supporters that the democrat’s health bill will bankrupt the country.
The Augusta Chronicle reported:

U.S. Rep Joe Wilson said he wanted to make it clear Saturday that Republicans have an alternative to the Democrats’ health care bill.

The congressman spoke to between 150 and 200 supporters, and a few protesters, at the Aiken County Republican Party headquarters in downtown Aiken. Mr. Wilson, whose 2nd Congressional District includes portions of eastern and southern Aiken County, did not speak on the incident that drew international attention.

“I do want to be heard, and I will not be muzzled,” he said. “We as Republicans have a positive agenda, and an alternative to the House bill I believe will bankrupt the country.”