From Poland’s Daily News Fakt last week after Obama announced he was scrapping the missile defense agreements with staunch US allies Poland and the Czech Republic–
“Treason! We’ve Been Sold to the Russians” 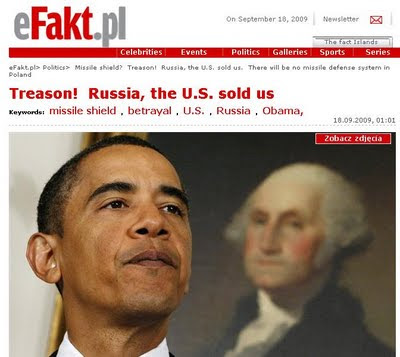 On Sunday, in a morning show interview Barack Obama dismissed accusations that the Russians had influenced his decision to scrap the Eastern European missile defense system.
MSNBC reported:

President Barack Obama sharply dismissed criticism that Russian opposition influenced his decision to scrap a European missile defense system, calling it merely a bonus if the leaders of Russia end up “a little less paranoid” about the U.S.

“My task here was not to negotiate with the Russians,” Obama told CBS’ “Face the Nation” in an interview for broadcast Sunday. “The Russians don’t make determinations about what our defense posture is.”

Today Russian leader Dmitry Medvedev told students at Pittsburgh University that he did have input on the president’s decision.
MSNBC reported:

What’s important is Barack Obama listened to my position. Perhaps it was part of the basis for his decision. We are learning to listen to each other. This is a change from the previous administration. I think these are bold, courageous decisions, to change decisions of previous administrations concerning foreign policy. This was a complex decision. I tried to put myself in his shoes. It would not have been easy for me.

In November 2008, less than one year ago, Polish President Lech Kaczynski’s office said Obama pledged to go ahead with the US missile defence system in Poland. But, by March Obama wrote Russia and was ready to scrap the program.