Ten Years Ago Today-
The Iranian Student Protests of July, 1999 (Also known as 18th of Tir and Kuye Daneshgah Disaster) were at the time the “worst”, most widespread and violent public protests in Iran, since the early years of the Iranian Revolution.

They began on July 8, 1999, with peaceful demonstrations in Tehran against the closure of the reformist newspaper, Salam. This was followed by an attack on a student dormitory that night by riot police in which a student was killed. This in turn sparked six days of demonstrations and rioting throughout the country in which at least three more people were killed and more than 200 injured.

Following the riots in 1999, more than seventy students disappeared. In addition, to an estimated 1,200–1,400 were detained, the “whereabouts and condition” of five students named by Human Rights Watch remained unknown, but were believed to be detained by Islamic authorities.

Ahmad Batebi- The Face of the Uprising 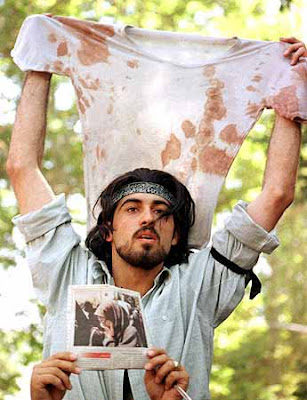 During his studies at the University of Tehran Ahmad Batebi gained international fame for his appearance on the July 17, 1999 cover of The Economist magazine, holding up a shirt splattered with the blood of a fellow protester.

The photo, which has been called “an icon for Iran’s student reform movement”, was taken during the Iranian Student Protests in July 1999 in Tehran. Following its publishing, Batebi was arrested, tried in closed-door proceedings, found guilty of “creating street unrest”, and sentenced to death.

Last year during a break from his prison sentence to seek medical assistance Ahmad Batebi fled Iran traveling through a free Iraq to Austria and finally arriving in Washington DC. He was later granted asylum status by the United States government.

Last month I was honored to speak with Ahmad Batebi about the current situation in Iran.
Batebi talked about the reaction by the Obama Administration to this brutal crackdown on peaceful demonstrators.
Here is what Ahmad Batebi told me:

Translated by Banafsheh Zand-Bonazzi
Here is what Ahmad Batebi told me about Obama’s response to the Iranian crisis:

“His (Obama) lack of response will not be regarded lightly. We will watch for how much his response will help the people or the regime. We will know more this week… Obama can hold talks with the regime in Iran if he wants. Is it morally correct for Obama to support the regime? Does he actually believe the people of Iran will appreciate that? The social movement requires support. If the world really wants the advent of terrorism to disappear in the Middle East, if they want peace with the Palestinians and Israel, if they want nuclear techhology to be developed for peaceful things and not nuclear weapons… They only need to support the people of Iran right now. This regime has the most dangerous of ideologies. They’re killing the opposition.”

There is more audio from that interview here. 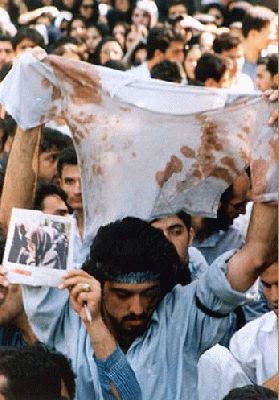 Here is another shot of Ahmad batebi in 1999 before his arrest. (geocities)

Michael Ledeen has more on this historic day in Iranian history.