Iranian regime thugs are caught on tape destroying cars and motorcycles parked on the street:

The Regime in Iran has started hanging the democracy protesters.
The Jerusalem Post reported:

As the Iranian authorities warned the opposition on Tuesday that they would tolerate no further protests over the disputed June 12 presidential elections, a report emerged of the hangings of six supporters of defeated candidate Mir Hossein Mousavi.

Speaking after Iran’s top legislative body upheld the election victory of incumbent Mahmoud Ahmadinejad, sources in Iran told this reporter in a telephone interview that the hangings took place in the holy city of Mashhad on Monday. There was no independent confirmation of the report.

Underlining the climate of fear among direct and even indirect supporters of Mousavi’s campaign for the election to be annulled, the sources also reported that a prominent cleric gave a speech to opposition protesters in Teheran earlier this week in which he publicly acknowledged that the very act of speaking at the gathering would likely cost him his life.

“Ayatollah Hadi Gafouri said that the Imam [Ayatollah Ruhollah Khomeini] never wanted [current supreme Leader] Ali Khamenei to succeed him. He even went to say that the Islamic republic died the day the Imam did,” one source said. 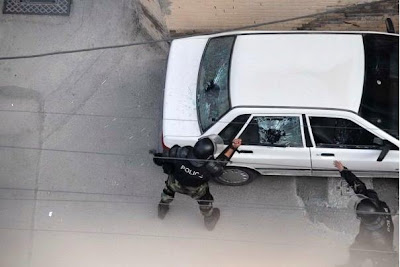 Iranian police are pictured smashing the windows of a car. Regime police were reportedly smashing windows of cars that were honking in support of the protesters. (Anonymous Iran)

Iran Press News has the photo of a beaten protester that is too disturbing to post here. 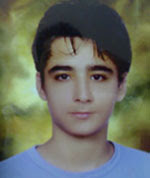 The sister of 18 year-old student and athlete Ashkan Sohrabi talks about his death at Rooz Online. Ashkran was shot 3 times by the regime during a protest last week.