Steve McNair shot dead- The bodies were found late this morning by his former body guard. 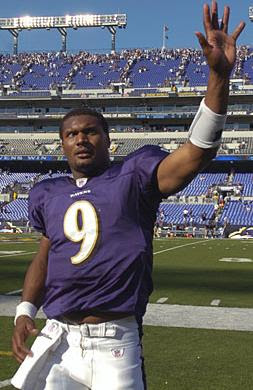 McNair was one of the toughest quarterbacks to play the game in the last decade.

Steve McNair was shot and killed today in Nashville, Tennessee.
McNair led the Tennessee Titans to the superbowl as quarterback in 2000. He suffered back problems throughout his career. In 2008 he retired from the game.
The AP reported:

Former NFL quarterback Steve McNair(notes) and a woman were found shot to death Saturday inside a residence in Nashville, police said.

Nashville police spokesman Don Aaron confirmed that authorities were called to a condominium and found McNair and a woman shot to death inside. Aaron said police don’t yet know the circumstances of the shootings.

“I don’t have any answers for you now as to what’s happened, who’s responsible,” Aaron said.

Aaron said police tentatively have identified the woman but did not release her name.

“There are persons who were around the complex today, visitors, who have been taken to headquarters for questioning, just to see what they know, what they may have seen,” Aaron said. “No one is in custody right now.”

The condominium where the bodies were found is one that McNair was known to frequent, but police spokeswoman Kristin Mumford could not say whether he was the owner.

The AP said the woman who was shot dead was not his wife Mechelle.

UPDATE: His 20 year-old girlfriend shot him repeatedly and then shot herself in the head.