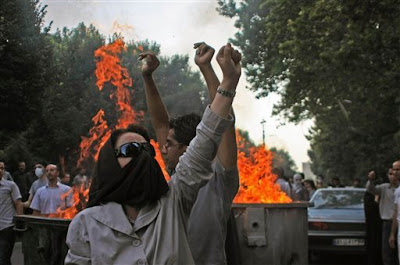 An Iranian female protestor clenches her fist, as she covers her face in front of burning public trash bins during an opposition rally in Tehran, Iran, Thursday, July 9, 2009. (Breitbart)

The BBC Persian website has several photos from today. 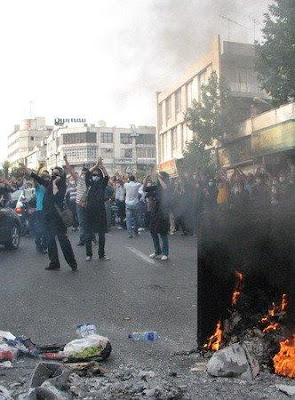 Today is the 10 Year Anniversary of The Iranian Student Protests of July, 1999 also known as 18th of Tir and the Kuye Daneshgah Disaster.

The regime launched a preemptive war against the protesters.
The regime promised to crack down on protests today on this anniversary of the 1999 student uprising. 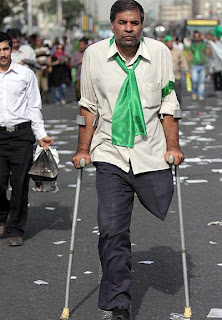 But, the Iranians protested the regime today despite the threats. (Banafsheh)

Here is a video from Iran today:

The protesters are shouting, “Khamenei go to hell.” 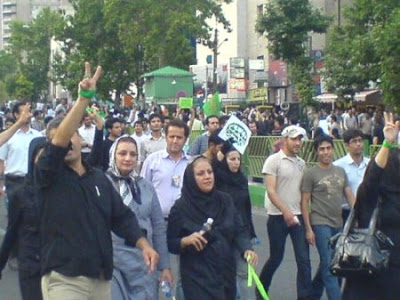 There were several demonstrations today reported in Iran.

The police are shooting tear gas at the people. Protesters are shouting “Death to Dicator!”

Clashes are reported in Saatad Abad. Hundreds of protesters are sitting on the ground at 12-e-Farvardin.

2,000 to 3,000 people are moving toward Tehran University and chanting, “Don’t be afraid, we all are together.”

Clashes are reported between police and people at Ebghelab Square in Tehran.

Saeed Valadbaygi is liveblogging at Revolutionary Road including this horrific report- “The basij are throwing protesters from pedestrian bridges in Shiraz.”

Police in Tehran are arresting seemingly at random, throwing tear gas into buses. Hundreds of Protesters are chanting against the regime infront of Ploytechnic University, Near Azadi Square. Police used Teargas against the people and are trying to push them back at Vanak Square. There are protests reported in Tabriz, Isfahan & Shiraz, as well.

Here is video from the Iranian protests today:

There are reports from Iran that the people are attacking the basij regime thugs.

Michael Ledeen has more on the uprising today at Pajamas Media.

American Power has more on the crackdown.