Set down the coffee… The AP just reported that Obama lied during his press conference last night.
Heads are gonna roll.
How did this ever slip by the editors? 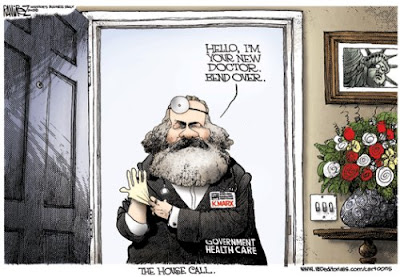 President Barack Obama’s assertion Wednesday that government will stay out of health care decisions in an overhauled system is hard to square with the proposals coming out of Congress and with his own rhetoric.

Even now, nearly half the costs of health care in the U.S. are paid for by government at all levels. Federal authority would only grow under any proposal in play.

A look at some of Obama’s claims in his prime-time news conference:

OBAMA: “We already have rough agreement” on some aspects of what a health care overhaul should involve, and one is: “It will keep government out of health care decisions, giving you the option to keep your insurance if you’re happy with it.”

Indeed, Obama went on to lay out other principles of reform that plainly show the government making key decisions in health care. He said insurance companies would be barred from dropping coverage when someone gets too sick, limits would be set on out-of-pocket expenses, and preventive care such as checkups and mammograms would be covered.

It’s true that people would not be forced to give up a private plan and go with a public one. The question is whether all of those private plans would still be in place if the government entered the marketplace in a bigger way.

OBAMA: “I have also pledged that health insurance reform will not add to our deficit over the next decade, and I mean it.”

THE FACTS: The president has said repeatedly that he wants “deficit-neutral” health care legislation, meaning that every dollar increase in cost is met with a dollar of new revenue or a dollar of savings. But some things are more neutral than others. White House Budget Director Peter Orszag told reporters this week that the promise does not apply to proposed spending of about $245 billion over the next decade to increase fees for doctors serving Medicare patients…

OBAMA: “You haven’t seen me out there blaming the Republicans.”

THE FACTS: Obama did so in his opening statement, saying, “I’ve heard that one Republican strategist told his party that even though they may want to compromise, it’s better politics to ‘go for the kill.’ Another Republican senator said that defeating health reform is about ‘breaking’ me.”

Could someone please help me pick my jaw up off the floor.