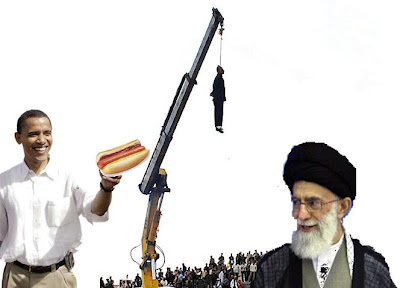 Here is Andrew’s latest attempt to prop up our weak president:

Read this whole interview with Hooman Majd. It’s most helpful, and brutal on the solipsism and cynicism of the neocons. Money quote:

The neocons know nothing about Iran, nothing about the culture of Iran. They have no interest in understanding Iran, in speaking to any Iranian other than Iranian exiles who support the idea of invasions — I’ll call them Iranian Chalabis. It’s offensive, even to an Iranian American like me. These are people who would have actually preferred to have Ahmadinejad as president so they could continue to demonize him and were worried, as some wrote in Op-Eds, that Mousavi would be a distraction and would make it easier for Iranians to build a nuclear weapon and now all of a sudden they want to be on his side? Go away.

I’m not saying Obama is the most knowledgeable person on Iran, but he’s obviously getting good advice right now. He understands way more about the culture of the Middle East than any of the neocons. For them to be lecturing President Obama is a joke. I have criticized Obama; for instance, I criticized him for having a patronizing tone in his Persian New Year message. But right now I think he’s doing a good job. The John McCains of the world, they’re Ahmadinejad’s useful idiots. They’re doing a great job for him.

Of course, Hooman Madj is a well known apologist for the killer Iranian regime.
But, this was lost on Andrew Sullivan.
So, who’s the useful idiot again?