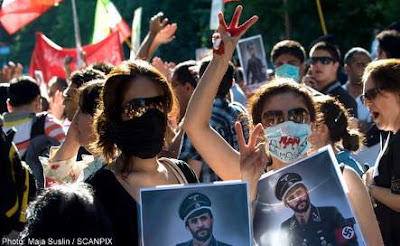 Founding Bloggers has video of the protesters storming the embassy.

Angry demonstrators broke into the Iranian Embassy outside Stockholm on Friday, climbing in through shattered windows and injuring one embassy worker, police said.

More than 150 people had gathered outside the embassy to protest against the Iranian regime, when some of them attacked the building with rocks and tore down a fence to enter the embassy grounds, police spokesman Ulf Hoglund said.

“A few managed to climb through broken windows into the building,” Hoglund said. He said one member of the embassy staff was injured inside the building, but didn’t know how seriously.

Fifty police officers and an ambulance were dispatched to the scene. Hoglund said police had evicted the demonstrators from the building and arrested one person. 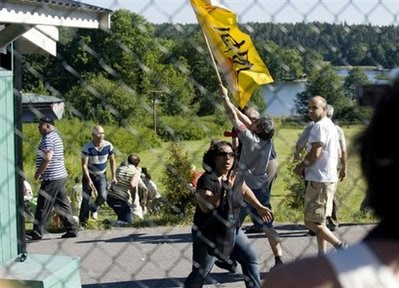 Demonstrators attack Iranian Embassy security personel inside the embassy grounds in Stockholm. Iran summoned Swedish Ambassador Magnus Werndstedt after an employee of its embassy in Stockholm was injured in what Tehran called a “terrorist” attack, the official IRNA news agency reported. (AFP/Maja Suslin)

HotAir has more on the attack.