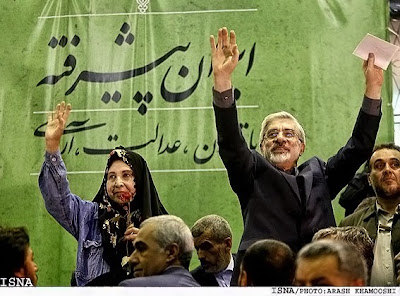 The wife of a moderate Iranian presidential candidate dismissed comparisons with U.S. First Lady Michelle Obama but pledged to play a prominent role improving women’s rights in the Islamic Republic.

Zahra Rahnavard has broken new ground in Iranian politics by actively campaigning for her husband, former prime minister Mirhossein Mousavi, and on Sunday went a step further by summoning journalists to a news conference.

She demanded an apology from hardline President Mahmoud Ahmadinejad, who questioned her academic qualifications in a televised debate with Mousavi, and said women will win greater influence if her husband is elected on Friday.

“I am not Michelle Obama. I am Zahra Rahnavard,” said the 61-year-old grandmother and professor, whose supporters believe she could become a pioneering ‘first lady’ of Iran. “But I do respect all women activists wherever they are in the world.”

Rahnavard said Mousavi would appoint women to senior positions across government, and frequently used the plural “we” when speaking about how his policies would be implemented.