The approved candidates are holding rallies this week in Iran. 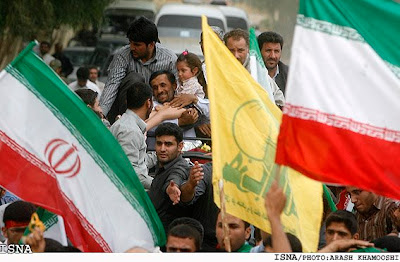 The Hezbollah terrorist flag joins Mahmoud Ahmadinejad at a rally this week. (ISNA)

The sham Iranian election with approved candidates will be held this weekend.
Mahmoud Ahmadinejad is expected to win re-election.
The Wall Street Journal has a report on today:

To be sure, decades of incessant revolutionary activity has taken its toll on the Iranian people, the vast majority of whom were born after 1979. Apart from having to live under a regime where political opposition is brutally oppressed, adulterers are regularly stoned to death, and the limbs of petty criminals amputated in public, the vast majority of ordinary Iranians do not desire to live in a country that is regarded as an international pariah and is constantly subjected to the privations of economic sanctions.

It was for this reason that expectations for the presidential election were running high both inside Iran and throughout the wider world. Many hoped it would be a watershed moment when Iran’s people could force a dramatic change of direction in the way the country is governed. Trying to encourage the moderates to gain the upper hand in Tehran has, after all, been the holy grail of Western policy makers for decades.

The administration of George W. Bush had hopes of helping Iran’s Internet generation (Iran is one of the world’s leading blogging nations) to have its voice heard above the regime’s repressive strictures, a policy that’s continuing under President Barack Obama. It hasn’t worked.

Some 475 candidates put their names forward to become the country’s seventh post-revolutionary president. They included Mohammed Khatami, the moderate politician who served for two terms as Iran’s president from 1997.

However, it was Mr. Khatami’s surprise victory then that prompted the hard-liners around Supreme Leader Khamenei to implement measures that would prevent moderates from gaining power again. Thus, for the past two elections to the Majlis (the Iranian parliament) the Revolutionary Guards — who are controlled directly by Mr. Khamanei — have carefully vetted all the candidates to ensure only those with the right revolutionary credentials are allowed to stand.

Now the regime, in the form of the Guardian Council, which is charged with upholding the tenets of Khomeini’s revolution, has employed the same tactic ahead of the presidential election: Of the original 475 applicants only four candidates have survived the cull. All of them have revolutionary credentials beyond reproach.

More at the WSJ.
Look for Team Obama to congratulate the nation for pulling off the sham. 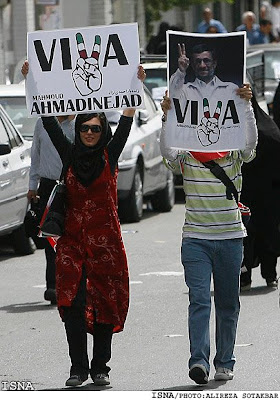 UPDATE: After getting a taste of democracy the Iranian people are turning on the regime.

Azarmehr has video of how the Iranian people are taking advantage of the freedoms briefly granted before the elections.

Some of the slogans they are shouting:
‘Free choice of Hejab is the Right of Iranian Woman’
‘Down with this government of lies’
‘The oil money is missing, we have all been cheated’
‘Reform of the Constitution’
‘Death to Dictator’