Iran’s Most Wanted—
Iran Press News believes they have captured photos of Hamas and Hezbollah thugs in Iran: 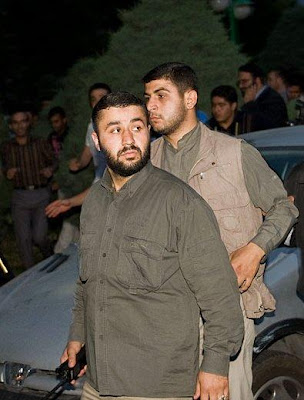 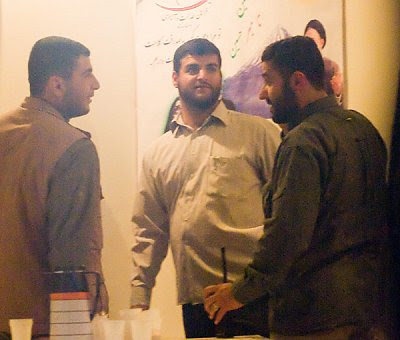 Hamas is helping the Iranian regime crush heads and dissent.
The Jerusalem Post reported this yesterday:

Hamas formally welcomed incumbent Ahmadinejad’s ostensible reelection victory on Saturday. The Palestinian Islamist movement receives arms and funding from Iran, and its members have often received training there, including in terror tactics and weapons manufacture…

Another protester, who spoke as he carried a kitchen knife in one hand and a stone in the other, also cited the presence of Hamas in Teheran.

On Monday, he said, “my brother had his ribs beaten in by those Palestinian animals. Taking our people’s money is not enough, they are thirsty for our blood too.”

It was ironic, this man said, that the victorious Ahmadinejad “tells us to pray for the young Palestinians, suffering at the hands of Israel.” His hope, he added, was that Israel would “come to its senses” and ruthlessly deal with the Palestinians.

When asked if these militia fighters could have been mistaken for Lebanese Shi’ites, sent by Hizbullah, he rejected the idea. “Ask anyone, they will tell you the same thing. They [Palestinian extremists] are out beating Iranians in the streets… The more we gave this arrogant race, the more they want… [But] we will not let them push us around in our own country.”