It must be proper protocol…
If the state-run media is not bashing Republicans or Christians, they’re bashing Jews. 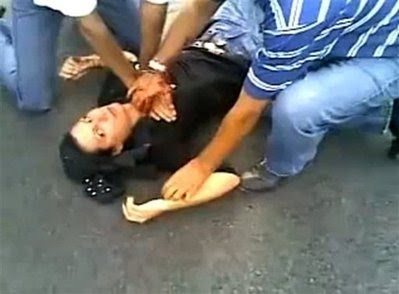 On Monday’s Countdown show on MSNBC, as host Keith Olbermann and NBC News correspondent Richard Engel discussed the apparent murder of 27-year-old Neda Agha-Soltan by Iranian government forces as part of the crackdown against pro-democracy protesters, and the possibility that she will become the visual symbol for her country’s pro-democracy movement because her death was recorded, Engel brought up the infamous Mohammed al-Dura video clip from September 2000 and claimed that the Palestinian boy was shot and killed by Israeli troops – as if this story were not in dispute – even though many who have examined the case closely over the years believe not only that the boy was not hit by Israeli bullets, but that the video purporting to document his shooting and death was likely a hoax.

In May 2008 a French court sided with activist Philippe Karsenty who called the iconic Palestinian Al-Dura ‘martyrdom’ film a hoax. The French Court of Appeals issued a ruling in favor of Karsenty who claimed the purported shooting death of a 12-year-old Palestinian boy – used to spark the “Al Aqsa intifada,” or uprising – was a hoax.