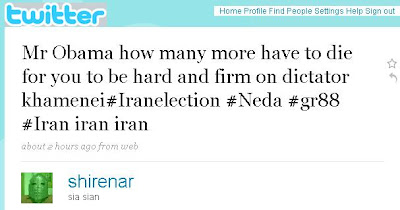 President Clueless speaks.
Today President Obama said it was not too late for the for Iranian Government to peacefully resolve the unrest.
Not even images of bloodied protesters and video dying students is going to sway this president from his goal of negotiating with this thug regime.

Even a blind protester has greater sight than the willfully blind Obama.
FOX News reported:

President Obama implored the Iranian regime Tuesday to pursue a “peaceful path” to resolve the election dispute that has thrown the country into chaos, saying it’s “not too late” for the government to do so and engage with the international community.

Though some analysts see the protests on the streets of Iran as a potential tipping point that could eventually lead to the toppling of the regime, the U.S. president made clear that he’s still interested in reviving diplomatic ties with the hard-line Islamic government.

He said the United States is “appalled and outraged” by the regime’s crackdown on protesters, but that his administration is taking a wait-and-see attitude.

“What’s happened in Iran is profound and we’re still waiting to see how it plays itself out,” Obama said. “It’s not too late for the Iranian government to recognize that there is a peaceful path that will lead to stability and legitimacy and prosperity for the Iranian people. We hope they take it.” He said there is a path for the country to engage with the global community.

Peaceful path?
What planet is he living on?
This man is too much.

Dear Leader also says he’s not satisfied with the progress that we’ve made with the economy. 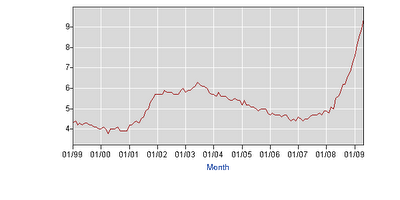 Obama’s final statement on Iran– “We’ve got to believe that justice will prevail.”
He can’t possibly be this daft. Can he?

UPDATE: I do love Winston‘s take on President Panty Waist:

Yeah, yeah, the coward US president Obambi talked about how appalled he is regarding the violence in Iran but seriously I want him to stay out of this now. He came to this point very late and he’s a man who is not willing to back his deceiving rhetoric up with meaningful action. He’s harming the people’s cause now. If he backed up his rhetoric with covert and overt action against the mullahs of Iran, then we could expect results. But when he invites the Iranian regime’s diplomats to 4th of July BBQs at the US embassies, then there’s no way I can believe he is serious. Ok, this was one thing I wanted to mention. Again this ain’t about Obamble now. He’s shown to be a disgrace and one whose mentor of 20 yrs was a racist lunatic.