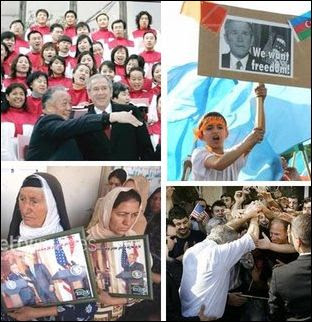 President Bush’s made this pledge to political dissidents and freedom activists in 2005, “We will stand with you.” And, the oppressed took him at his word. There was an Orange Revolution in Ukraine, a Tulip Revolution in Kyrgyzstan, and a Cedar Revolution in Lebanon that spring. There were democratic elections in Afghanistan where women were not only allowed to vote but took seats in parliament. There were democratic elections for the first time in the United Arab Emirates. Saudi Arabia released political dissidents. There were Arab democracy conferences in Qatar and women were allowed to vote in Kuwait. Egyptian judges stood up against a regime. Another regime in Libya opened up to the West. And who could forget the Iraqis who walked for miles, braving terrorist death threats, to vote in free democratic elections for the very first time.

Later in 2007, President Bush delivered an inspirational speech at the Prague Democracy and Security Conference, before dozens of political dissidents representing 17 different countries:

“In this room are dissidents and democratic activists from 17 countries on five continents. You follow different traditions, you practice different faiths, and you face different challenges. But you are united by an unwavering conviction: that freedom is the non-negotiable right of every man, woman, and child, and that the path to lasting peace in our world is liberty…

The most powerful weapon in the struggle against extremism is not bullets or bombs — it is the universal appeal of freedom. Freedom is the design of our Maker, and the longing of every soul. Freedom is the best way to unleash the creativity and economic potential of a nation. Freedom is the only ordering of a society that leads to justice. And human freedom is the only way to achieve human rights…

In my second inaugural address, I pledged America to the ultimate goal of ending tyranny in our world. Some have said that qualifies me as a “dissident president.”

If standing for liberty in the world makes me a dissident, I wear that title with pride.”

President Bush later met with democracy activists from Burma on the twenty year anniversary of the bloody 8888 Protests in Burma. And before he left office in December 2008 President Bush met with dissident bloggers on Human Rights Day.

But those days are over. There’s a new administration in town with a new set of rules and a new set of priorities. Persecuted political dissidents and brave democracy activists do not rank high on the list.

Already this year the Obama Administration has waived sanctions on Syria, considered opening travel to Cuba, announced plans to drop sanctions against the murderous junta in Burma, reportedly approved Sharia Law in the tribal regions of Pakistan in exchange for a bogus peace treaty, praised the Venezuelan “democracy,” discussed holding talks with the Iranian regime, and accepted China’s human rights abuses. That’s quite a record and it hasn’t even been 200 days since they took office.

In February seven former Iranian student prisoners wrote a letter to President Obama and urged him to support the democratic movement of the Iranian people. Their letter went unanswered. It should come as no surprise then that as chaos broke out this weekend in Iran over a very controversial election result the Obama Administration fell silent.

This weekend as rioting broke out across Iran the Obama administration released this statement:

“This is a debate among Iranians about Iran’s future.”

Less than 24 hours after the flawed results were announced by the official media the Obama Administration announced that they would engage with the regime.