Iranian blogger Azarmehr is reporting that regime supporters wielding clubs are roaming the streets in Iran. 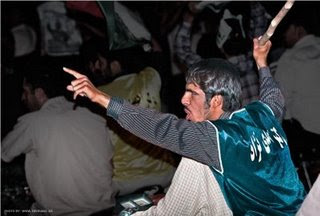 Banafsheh Zand Bonazzi translates– The picture shows club-wielding Basijis (regime thugs). The vest the man is wearing says “Dr. Ahmadinejad.” The man in the yellow vest is also with the Basiji.

Ahmadinejad and Mousavi supporters clashed in Tehran on Saturday.
At least two people were carried away from the scene.
Globe and Mail reported:

Hundreds of supporters of President Mahmoud Ahmadinejad and moderate challenger Mirhossein Mousavi clashed in Tehran on Saturday after a landslide victory for Mr. Ahmadinejad in a presidential election, a Reuters witness said.

Police using batons moved to disperse the demonstrators who were staging a sit-in to protest against Mr. Ahmadinejad’s victory. They were chasing and arresting some of the protesters.

The witness saw two men being carried away from the scene at Vanak square in the Iranian capital. Some people were having fistfights.

The violence broke out as Iran’s Interior Minister announced that Mr. Ahmadinejad had won Friday’s election, gaining 62.6 per cent of the vote in an election which Mr. Mousavi has criticized for violations.

Up to 2,000 Mousavi supporters then staged a sit-in in the middle of the road, clapping hands and chanting: “Mousavi take back our vote What happened to our vote?”. They also chanted at security forces: “Police, brother, you’re one of us“.

UPDATE: There was a massive demonstration today in Tehran against the regime for stealing the election yesterday: