Ahmadinejad: Iran's Progress Source of Pride to All Freedom-Loving People 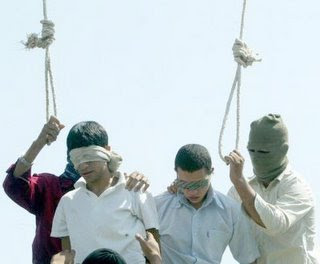 Two gay teenagers, Mahmoud Asgari, 16, and Ayaz Marhoni, 18, were publicly executed in Iran on 19 July 2005 for the ‘crime’ of homosexuality. The youths were hanged in Edalat (Justice) Square in the city of Mashhad, in north east Iran. They were sentenced to death by Court No. 19.

Ahmadinejad says progress in Iran is a source of pride to all freedom-lovers.
Fars News reported:

Iranian President Mahmoud Ahmadinejad said on Tuesday the progresses and successes made by the Iranian nation following the Islamic Revolution are a source of pride for all freedom-lovers and justice-seekers across the world.

Addressing a gathering of Iranians in Mazandaran province Ahmadinejad, one of the candidates in the June 12 presidential election, reiterated that the Islamic Revolution took place in an effort to ensure justice and provide equal rights to the people.

He described the current situation of Iran incomparable with the situation before the Islamic Revolution, and said, there are ample untapped social and economic opportunities in the country.

Except women who are caught out in public without a veil. 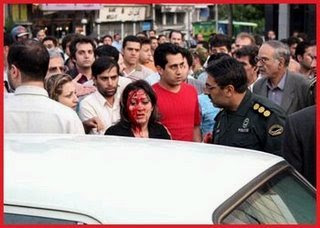 In May 2007 a group of Police officers got involved in physical struggle with three girls who they questioned for their “immodesty”. According to eye witnesses, the officers were trying to arrest the girls. They women were beaten to a bloody pulp. Iran Press News (Persian) and Kamangir found the clip and posted the video of the aftermath of this vicious attack by the “Modesty Police” on unveiled Iranian women in Tehran.

More… Gay Patriot has more on the plight of gays in Iran.