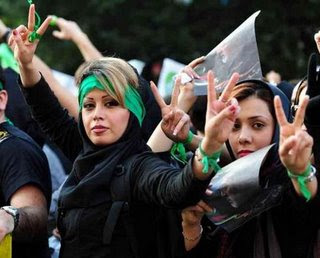 It’s over. The Iranian Democracy babes are out and they’re even showing some hair. (Mujahidjohar)

Meanwhile, the Basij is not going away anytime too soon.
An Iranian captured this video of the paramilitary members attacking an apartment building in Tehran:

Dozens of Mousavi supporters mobbed and heckled Iranian President Mahmoud Ahmadinejad after he left a mosque in Tehran before the election.
They start chanting “Mousavi” as he takes off with his handlers in car.
(This was updated)

This was floating on the internet today but actually took place prior to the election:

Maybe they were gay?
Via NIAC Blog:

This video, with translations from NIAC intern Nahid, shows Ahmadinejad getting heckled and mocked by a throng of Mousavi supporters as he leaves the mosque. For my money, chants don’t get much better than “Ahmadi Bye Bye!”

Someone I assume to be a government official walking up to a car with hand raised, in gray suit, condescendingly saying “Droplets of water, return to the ocean.” (it’s a reference to a poem)
The cameraman asking him: “Have you not been looking to the streets? Just look at the streets!”

Second cameraman: “Mr. Mirzavi, we liked you.” [too many people talking at the same time – inaudible] Cameraman again: “Just don’t cheat this time.”

Then they start screaming “MOUSAVI!” when Ahmadinejad shows up and “LIAR!” when he is pulling away, and then my favorite: “Ahmadi Bye bye.”

NIAC, a pro-Iranian regime organization in the US, is blogging the revolution.

Down but not out… 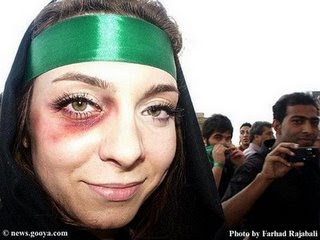 An opposition supporter sports a shiner but is still out protesting the regime. (Mujahidjohar)