Thank goodness there is a sane voice coming from Israel today. 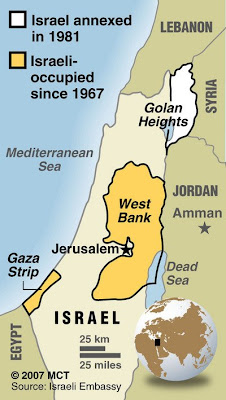 (McClatchy)
Israeli Prime Minister told a Russian-language newspaper on Friday that Israel will not give up the Golan Heights.
Israel Matsav reported on this CBS News story:

Netanyahu sent up a smoke signal that the White House should have no trouble deciphering. In a briefing with reporters from Russian-language newspapers, he said that Israel would never withdraw from the Golan Heights, which it took after defeating Syria during the 1967 Six Day War.

“Remaining on the Golan will ensure Israel has a strategic advantage in cases of military conflict with Syria,” Netanyahu said, according to several Russian-oriented Israeli Web sites, which published the comments on Friday.

At the same time, Netanyahu offered a likely preview of his talking points for the tete-a-tete with the president.

Iran will be the top focus. Netanyahu referred to that country’s nuclear enrichment program as “a major obstacle to peace in the Middle East.”

Giving up the Golan Heights would mean certain destruction for Israel.
Abandoning the territory would give Syria a clear military advantage over Israel.

Meanwhile… Obama National Security Advisor James Jones says that the Iranian threat can be reduced by the promotion of the two-state solution.
That’s wishful thinking.