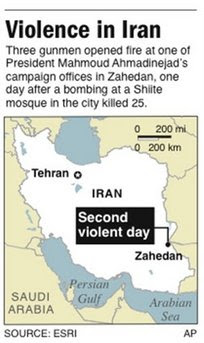 Gunmen attacked an office of Iranian President Mahmoud Ahmadinejad’s re-election campaign in the southeastern city of Zahedan, injuring a child and two others, the state-run Fars news agency said.

The president, who is seeking a second four-year term, was in Tehran when the incident took place today near the border with Pakistan, according to Fars.

The assailants shouted curses against Ahmadinejad and tore down his photographs before firing their weapons, Mahdi Jahantab, a campaign spokesman, was cited as saying by Fars. They were arrested by the police while trying to flee, Fars said, without providing further information.

The shooting took place in Zahedan on Friday, a day after a bombing at a Shiite mosque in the city killed 25 people.

Yesterday, a suicide bomber killed 30 people at a mosque in Zahedan.
Today the Iranian Regime blamed the US and Israel for the blast.