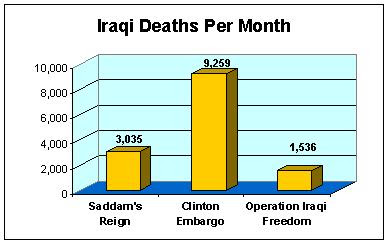 The AP reported Thursday that more than 110,600 Iraqis have died in violence since the 2003 U.S.-led invasion. That means that an average of 18,300 Iraqis were killed each year since 2003 or approximately 1,536 Iraqis on average every month. Of course this number has dropped significantly due to the successful Bush Surge.

So how do Bush’s numbers compare to the slaughter during Saddam Hussein’s reign or the deadly embargo kept in place during the Clinton years?
Scott Thong crunched the numbers:

Saddam Hussein’s reign: From the 285 months of Saddam Hussein’s reign from 16 July 1979 to 9 April 2003, using just six of the war crime events listed by U.S. War Crimes Ambassador David J. Scheffer, a total of 865,000 Iraqis civilians died as the result of Saddam’s ethnic cleansing, political oppression and ‘arrests’. That is a rate of 3035.088 deaths per month… 1.75 times greater than Bush’s death rate. This figure does not count the deaths of non-Iraqis, nor the casualties suffered during the wars against Iran and Kuwait, nor the countless other documented human rights abuses Saddam committed.

Bill Clinton era embargo: From the 108 months of 6 August 1990 to 6 August 1999, using the United Nations estimate, a total of 1 million Iraqi civilians died as result of the sanctions. Of these, as many as 567,000 of the casualties were children. That is a rate of 9259.259 deaths per month… 5.337 times greater than Bush’s death rate. Justify that, anti-war liberal Democrats. (Clinton actually only gained the Presidency on 20 January 1993, but the sanctions also lasted past the date of the UN estimate – to 22 May 2003, while Clinton stepped down on 20 January 2001.)

Back in 1996 Secretary of State Madeleine Albright said that Clinton’s policy that may have resulted in 500,000 dead Iraqi children was worth it.
In a much forgotten exchange between Lesley Stahl and Madeleine Albright on “60 Minutes” back on May 12, 1996:

That’s evil.
Isn’t it odd how these dead Iraqis never seemed to bother the Left?

Previously:
Madeleine Albright: “500,000 Dead Iraqi Children Was Worth It”
Barack Obama: “Preventing Genocide Is Not a Good Enough Reason to Keep US Troops in Iraq”