On Thursday I left Spain for a day excursion into Morocco. I traveled by bus down to Algeciras (sounds like Aljazeera’s), a port city on the coast of southern Spain. The ferry boat took us across the Strait of Gibraltar to Morocco. 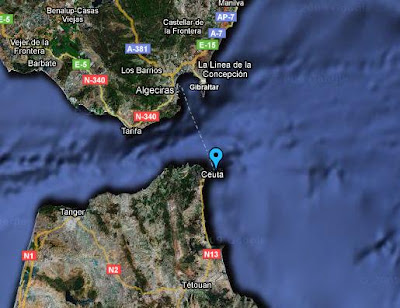 Gibraltar is a British overseas territory located near the southernmost tip of the Iberian Peninsula. (Google Map) 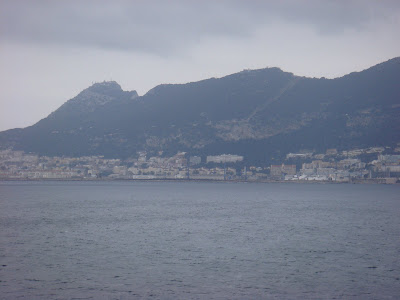 Gibraltar was larger than I imagined. 30,000 people live on the penisula that borders with Spain. The first people known to have settled on Gibraltar were the Phoenicians around 950 BC. Today the Brits control the land. 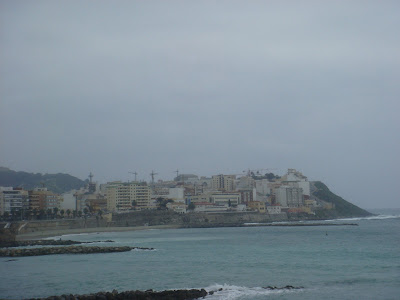 We landed in Ceuta, an autonomous city of Spain located on the North African Moroccan coast. It was a cloudy day and the waves were high. It was a nauseating ride for many of the passengers.

We loaded a bus and headed to the border of Ceuta and Morocco. Ceuta is very westernized and modern. It looks somewhat like a typical European city. We were not allowed to take photos at the border but it was like nothing I had ever seen in Middle America. There were long lines of Moroccans lined up on foot and in cars waiting to enter Ceuta. Many of the cars were turned off and the Moroccans were pushing them forward to save on gas as they waited for their turn to enter Ceuta. 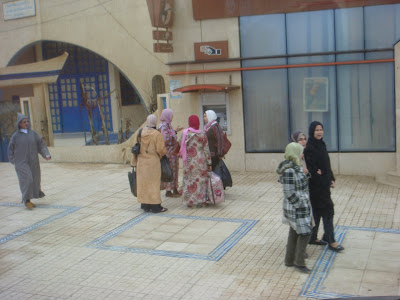 As we passed through the border it was obvious we were not in Ceuta anymore. Many of the women had their head covered although it was refreshing to see that there were women who chose not to cover their hair. The countryside was disorganized. There were donkeys, sheep and cows grazing right up next to the road. There were piles of rocks and rundown homes scattered across the countryside. Out on the highway you’d see women or men walking alone with kilometers between them and the next town.

We made a quick stop off the highway to ride the camels. It was the tourist thing to do. 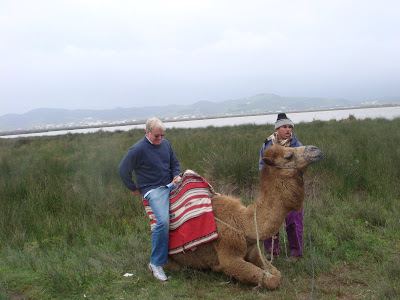 I paid my euro for a ride. I later paid another euro for a photo they took.

There was a protest at the Club Med that we passed in the bus. The guide said it was about wages(?) 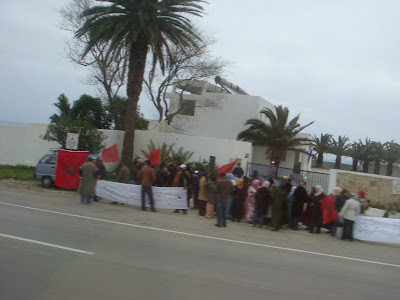 The protesters were carrying the Moroccan flag– a red flag with a green star. The color red has considerable historic significance in Morocco, proclaiming the descent of the royal family from the Prophet Muhammad via Fatima, the wife of Ali, the fourth Caliph. The green pentagon represents the 5 pillars of Islam.

Our next stop was in Tetouan, Morocco. We walked down the narrow streets of the ancient medina and looked at the many shops. 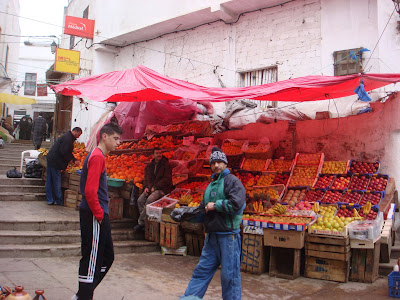 The fruit stands were colorful. Apples, oranges, melon, lettuce, nuts and dates are brought in from the countryside. 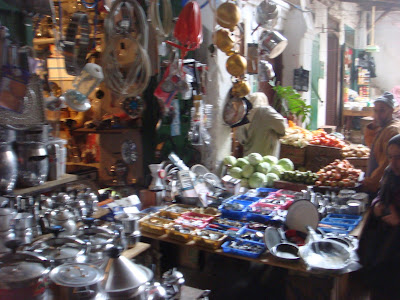 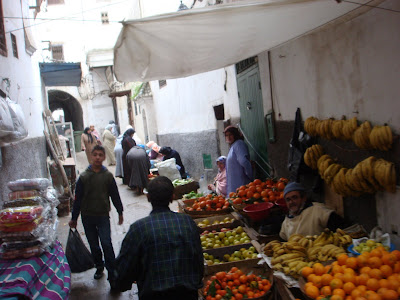 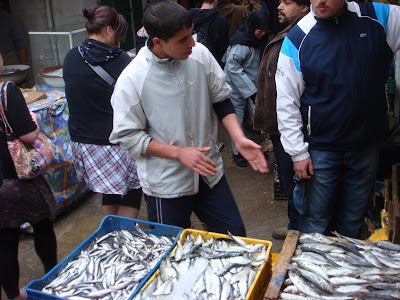 You could smell the fish stands from a half block away. Sardines were stacked up in boxes. There were no refrigerators on the street.

Then there were the chicken shops. 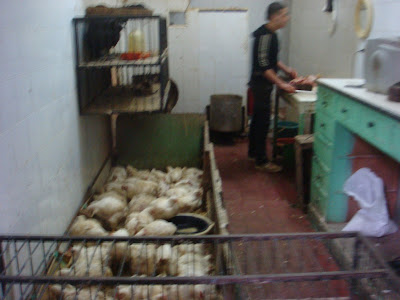 Live chickens were slaughtered and plucked right there in front of you for dinner. 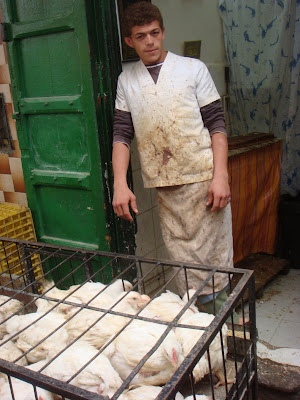 It didn’t look like the most sanitary of conditions. I wondered when was the last time this guy washed his apron. 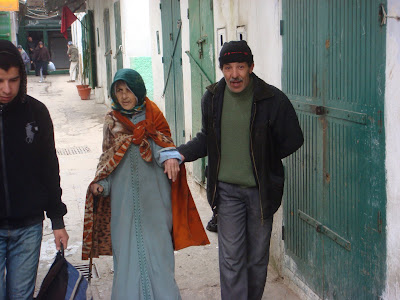 This man was very nice and said, “Welcome to Morocco.” 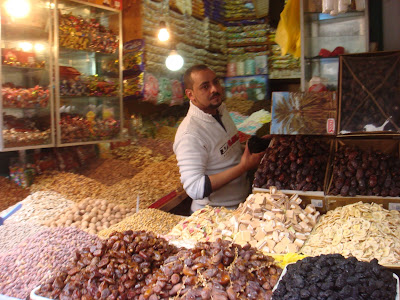 The date and nuts stand was as colorful as the fruit stands. Everything looked delicious.

There were children out walking with their mothers. 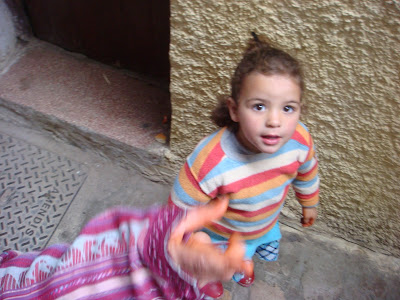 And, children returning home from school. 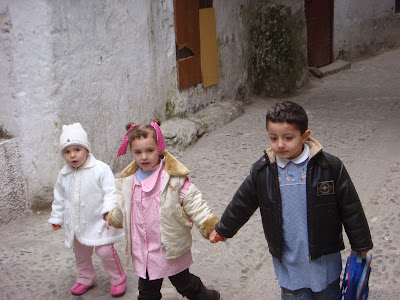 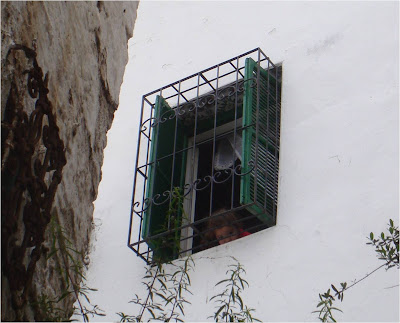 One little girl was peaking out at us from her upstairs window as we passed through the Medina. 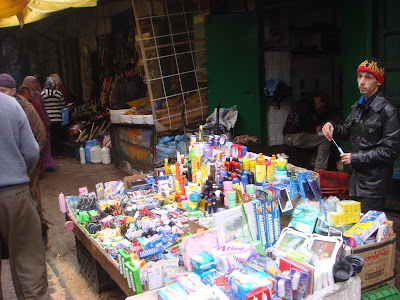 This shop was like a 7-11. It had everything. Some of the shops carried junk. They looked like a really bad garage sale. Other vendors laid out a matt on the ground and sold lettuce or vegetables. They only took up a few feet of space. You had to wonder how much these people made. You couldn’t help but feel sad for these people. 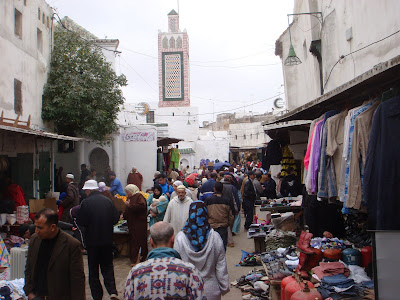 One street we passed through carried leather goods. 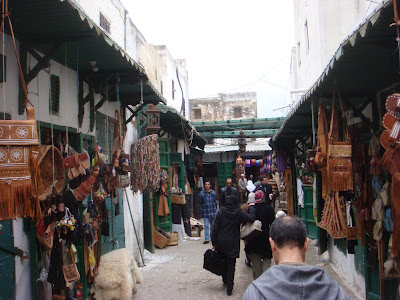 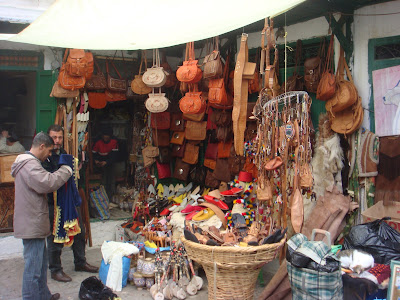 Our next stop was this wonderful restaurant inside the Medina. The food was delicious. It was clean and roomy. The bathrooms were even clean. I admit I was surprised they had toilets. The restaurant served chicken, vegetables, beef kabobs and couscous. 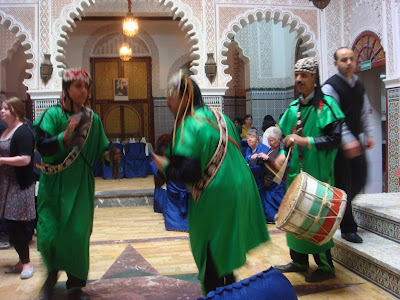 This little group was dancing around outside and inside the restaurant. They weren’t very good at dancing or drumming. They asked for donations.

After dinner we went over to the Berber rug shop. 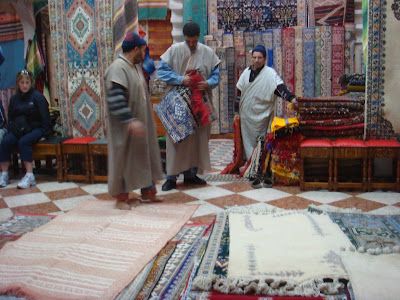 They spread the rugs out on the floor of the shop and then asked you which one you wanted. 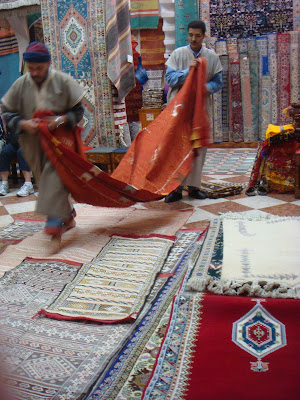 I stood my ground, bartered down the price and only bought… three. 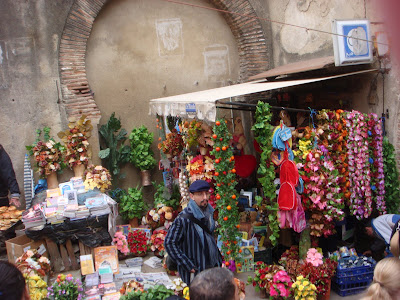 I noticed this flower stand as we left the Medina.

As we drove to the border we passed this stork’s nest. 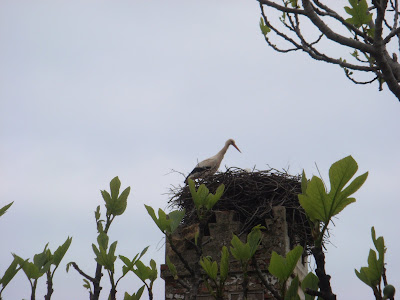 It was sitting on top of one of the crumbling homes in the countryside.

Our tour guide Mohammad dropped us off and went back to Morocco. It would take us another hour and a half to make it to Spain. It would take Mohammad longer to make it across the border and back to his home in Tetouan only a few miles away.
I was grateful to be from America.