The body of Mrs. Khadije Saqafi, the deceased spouse of the late founder of the Islamic Republic Ayatollah Khomeini was laid in rest in Imam Khomeini’s mausoleum in southern Tehran on Sunday. 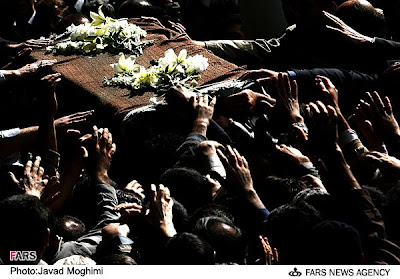 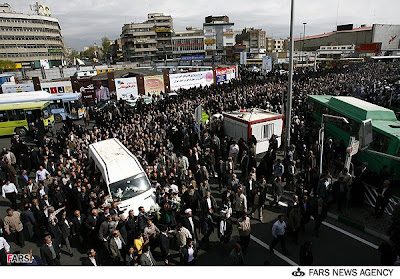 Iranian Fars News has several photos from the funeral.

Thankfully, the regime was able to bury Mrs. Khomeini before her body was ripped apart by mourners.
Her husband was not so lucky.
Mourners destroyed his coffin and ripped at his death shroud and dropped his corpse on the street at the funeral.
The New Statesmen reported:

The crowd surged past the makeshift barriers. John Kifner wrote in the New York Times that the “body of the ayatollah, wrapped in a white burial shroud, fell out of the flimsy wooden coffin, and in a mad scene people in the crowd reached to touch the shroud”. A frail white leg was uncovered. The shroud was torn to pieces for relics and Khomeini’s son Ahmad was knocked from his feet. Men jumped into the grave. At one point, the guards lost hold of the body. Firing in the air, the soldiers drove the crowd back, retrieved the body and brought it to the helicopter, but mourners clung on to the landing gear before they could be shaken off. The body was taken back to north Tehran to go through the ritual of preparation a second time. 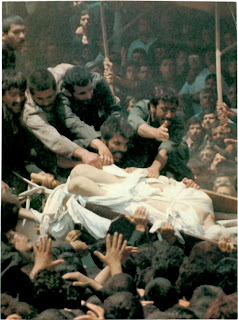 The crowds were subdued at Khadije Saqafi’s funeral.
This was a far cry from the mob ripping at her husband’s corpse.
(Updated)