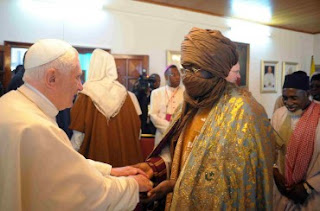 Here’s an aspect of Pope Benedict XVI’s just-concluded trip to Africa that deserves to be much more than a forgotten footnote.

Speaking March 19 to Muslim leaders at the apostolic nunciature in Yaoundé, Cameroon, the Pope reminded them that true religion rejects violence because it violates both faith and reason.

Said the Holy Father, “I believe a particularly urgent task of religion today is to unveil the vast potential of human reason, which is itself God’s gift and which is elevated by revelation and faith. Belief in the one God, far from stunting our capacity to understand ourselves and the world, broadens it.”

…The Pope concluded his remarks by encouraging Muslims “to imbue society with the values that emerge from this perspective and elevate human culture, as we work together to build a civilization of love.”

Surely the Muslim leaders will accept this feedback. Right?… Right?