Obama’s Chief of Staff Rahm Emanuel made at least $320,000 from Freddie Mac for the short time he worked with the failed mortgage giant.
The Chicago Tribune reported:

Before its portfolio of bad loans helped trigger the current housing crisis, mortgage giant Freddie Mac was the focus of a major accounting scandal that led to a management shake-up, huge fines and scalding condemnation of passive directors by a top federal regulator.

One of those allegedly asleep-at-the-switch board members was Chicago’s Rahm Emanuel—now chief of staff to President Barack Obama—who made at least $320,000 for a 14-month stint at Freddie Mac that required little effort.

As gatekeeper to Obama, Emanuel now plays a critical role in addressing the nation’s mortgage woes and fulfilling the administration’s pledge to impose responsibility on the financial world.

Emanuel’s Freddie Mac involvement has been a prominent point on his political résumé, and his healthy payday from the firm has been no secret either. What is less known, however, is how little he apparently did for his money and how he benefited from the kind of cozy ties between Washington and Wall Street that have fueled the nation’s current economic mess.

LiveLeak reported on this news back in November but only now did the mainstream media pay attention.

The one-time Democratic Party National Chairman Senator Chris Dodd was the top recipient of Fannie Mae and Freddie Mac Campaign Contributions from 1989 to 2008: 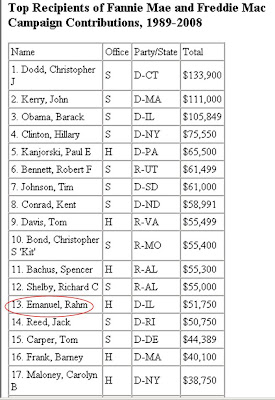 Barack Obama and Rahm Emanuel were also top recipients of campaign contributions from the mortgage giants even though they were not in office for many of those years.
Rahm Emanuel received $51,750 from Fannie Mae and Freddie Mac.

UPDATE: Two years after leaving the firm, Emanuel reported an additional sale of Freddie Mac stock worth between $100,001 and $250,000.
GayPatriot has more.