UPDATE: This looks like a photo from that same protest in Urmia: 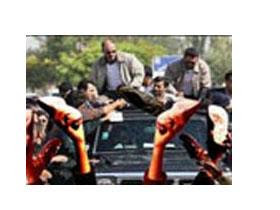 Urmia is an Iranian city populated predominantly by ethnic Azerbaijanis.

The regime in Iran supported a “shoe-chucking” infitada back in December after Far Left hero Muntadar al-Zeidi, a supporter of Muqtada al-Sadr, threw his shoes at President Bush. 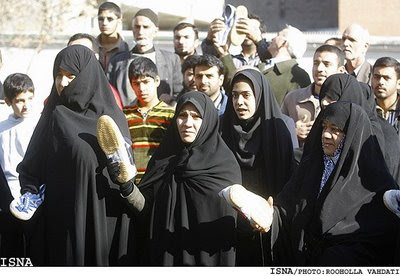 The regime even held shoe-chucking protests to rouse interest in the sport.

Today they got their wish.

This comes via Legal Insurrection:

The Guardian is reporting that a protestor threw his shoe at Iranian President Mahmoud Ahmadinejad during a visit to the north-western Iranian city of Urumiye:

An Iranian website, Urumiye News, reported that a shoe was hurled at the president as his convoy drove through a central square. Security guards waded into the crowds but failed to find the culprit.

A hat was also thrown in Ahmadinejad’s direction before his car sped away.

In 2006, ethnic Iranian-Azeris held numerous rallies in the region against the regime in Tehran…
Until government forces started firing on protesters: 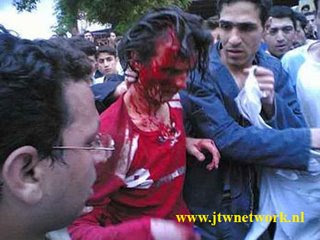 Several hundred protesters were killed, beat down or arrested.
This may help explain the shoe incident today.

Jim Hoft
Jim Hoft is the founder and editor of The Gateway Pundit, one of the top conservative news outlets in America. Jim was awarded the Reed Irvine Accuracy in Media Award in 2013 and is the proud recipient of the Breitbart Award for Excellence in Online Journalism from the Americans for Prosperity Foundation in May 2016.
WaPo Is Evil: US Ambassador Hoekstra Has Embassy Party with Conservative Thierry Baudet and the Left Loses It!
IT'S A SCAM: After 48,299 COVID-19 Cases at 37 US Universities - Only 2 Hospitalizations and ZERO Deaths -- More Likely to Be Killed By a Dog
EPIC! Big Dan Rodimer's Congressional Campaign Ad is JUST INCREDIBLE! -- VIDEO
WOW! 4Chan Sleuths Catch China Faking Simulated Missile Tests-- Clips Came from "Transformers" and "The Hurt Locker"
HUGE! President Trump Scores 48% in Latest Hill-Harris Poll and 25 PERCENT APPROVAL with Black Voters
See more...