Here’s something you won’t hear about from the Obamedia–
The solar panels that Barack Obama and Joe Biden inspected before signing the Generational Theft Act in Denver, Colorado will take 110 years to pay for themselves. 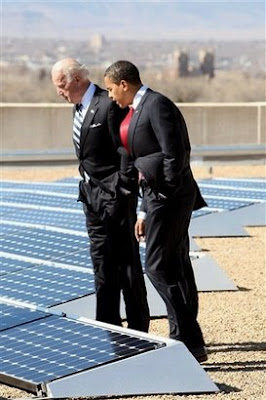 Those solar panels that Barack Obama bragged about in Denver will take until 2118 to pay for themselves. These same panels are expected to last 20-25 years.
The Independence Institute reported, via LGF:

Before signing the $787 billion stimulus package into law on Feburary 17, 2009, President Barack Obama and Vice President Joe Biden toured an array of solar panels on top of the Denver Museum of Nature and Science. The photo-op allowed the President to once again extol the virtues of the coming “green” economy.

According to the Denver Post’s article on the event, “The sun generates enough energy on the museum rooftop to power about 30 homes.” However, that claim cannot be verified at this time, and in fact, seems to be belied by the scant information provided by the museum and other sources.[1] Laura Holtman, Public Relations Manager for the Museum said in an email, “Because the array generates less than 5 percent of the Museum’s power, [the purchased energy] is not a particularly large bill.”

The Independence Institute asked the Denver Museum of Science and Nature to provide certain statistical information regarding the now-famous solar array. Specifically, the Institute asked for:

The Museum denied those requests.

The solar array is not owned by the Museum, however. It is owned by Hybrid Energy Group, LLC. HEG owns the solar array, sells the electricity to the Museum, and receives tax incentives from the state and federal governments, while also receiving “rebates” from Xcel Energy. The rebates are funded by a surcharge collected on the monthly bill of every Colorado Xcel customer.

A 2008 article in the Denver Business Journal sheds further light on the subject. The article notes the total price of the solar array was $720,000. And Dave Noel, VP of operations and chief technology officer for the Museum, was quoted as saying, “We looked at first installing [the solar array] ourselves, and without any of the incentive programs, it was a 110-year payout.” Noel went on to say that the Museum did not purchase the solar array because it did not “make sense financially.”

Additionally, most solar panels have an expected life-span of 20 to 25 years.