The students at Amir Kabir University in Tehran held massive demonstrations against the regime this week… Until a mob of regime thugs from outside the university beat and knifed the student demonstrators.
Here is video from the massive rally before the regime thugs came in to bust up the protest:

Protests by Tehran’s Polytechnic University (formerly Amir Kabir) students over the ‎burial of five “unknown martyrs” led to attacks by the government’s strike forces, ‎resulting in physical assault and tens of arrests.‎

The students had initially prepared and presented a petition with more than 3,000 ‎signatures regarding the burial of the dead, but Basijis and “religious mourners” who had ‎come to the university from outside attacked the protestors with “knives and fisticuffs”.‎

Amir Kabir news site run by the university’s student activists wrote of 60 injured ‎students, and 70 arrests following the clashes on Monday, leading to 20 students being ‎hospitalized and 30 being sent to Evin prison.‎

Radio Free Europe-Radio Liberty has more on the protests. 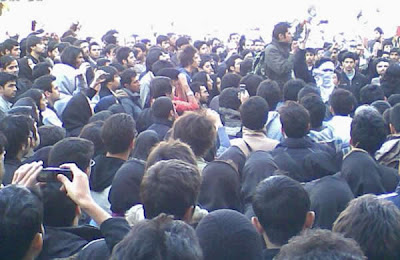 The regime raided the homes of students and arrested several dozen vocal activists after their protests this week. (Iran Focus Protest Photo)

Meanwhile… Several Hollywood nitwits led by Annette Bening are visiting with regime representatives in Iran this week. There was no word on whether they would be discussing the jailed activists.
Here’s a tip for the twits– If you don’t want to get beaten to a bloody pulp make sure your hair is covered.

UPDATE: Iranian ex-pats held a rally today outside the BBC offices in London to against the lack of coverage of recent events at Tehran Polytechnic by the BBC correspondent in Tehran.
Hat Tip Banafsheh Zand-Bonazzi