Who knew that being a democrat had so many perks? 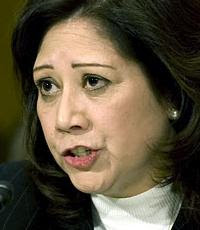 Today, in was reported that Obama’s nominee for labor secretary, Rep. Hilda Solis, has run into a little glitch of her own.
The Washington Post reported:

A Senate committee today abruptly canceled a session to consider President Obama’s nomination of Rep. Hilda Solis to be labor secretary in the wake of a report saying that her husband yesterday paid about $6,400 to settle tax liens against his business — including liens that had been outstanding for as long as 16 years.

The report, by USA Today, came just before the Senate’s Health Education Labor and Pensions Committee was slated to meet to consider Solis’s nomination, which had been delayed by questions over her role on the board of the pro-labor organization American Rights at Work. A source said that committee members did not learn about the tax issue until today.

Glenn Reynolds has two thoughts:
(1) Don’t any of these people pay their taxes? And (2) Is this, like, some kind of karmic payback for all the Joe-the-plumber tax business?

The Examiner calls this a train wreck.

Gawker lists the Obama scandals so far.
So much for hope and change… Team Obama has had more scandals in 2 weeks than Bush did in 8 years.